In my early days on Twitter I came across some wonderful old photographs posted by @LynnsWPics
Soon I also discovered Lynn’s Waffles and made an Internet friend, Lynn Heiden.  Lynn has a vast collection of historic pictures which she shares widely, so today I have asked her to tell us more about them.

What made you decide to start collecting old photographs?

It was something that just seemed to happen, we enjoy going to car boot sales and I love old stuff that comes under the category ephemera, so interesting.  I bought my first album quite a few years ago, simply because I couldn’t bear to think that it would get damaged or worse still be thrown away and lost forever.

I love the word ephemera as it sounds so fragile, just like the photos you are saving. 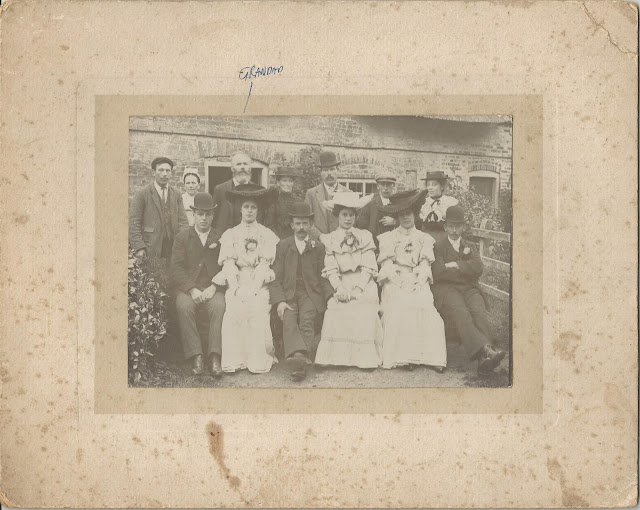 Where do you find them and how do you store them?

Mostly at car boot sales, but also antique fairs and markets.  I try & keep the CDV or Cabinet cards in their original Victorian leather albums, if I have bought them together.  Loose CDVs I have mostly in sections in some fabulous wooden ex wine boxes my husband found at a car boot. Other Cabinet cards I have in larger albums. Postcard photos in categories in albums. But I still have many in bags and boxes awaiting scanning, it’s hard to catch up, as I seem to have acquired rather a lot in the last year! 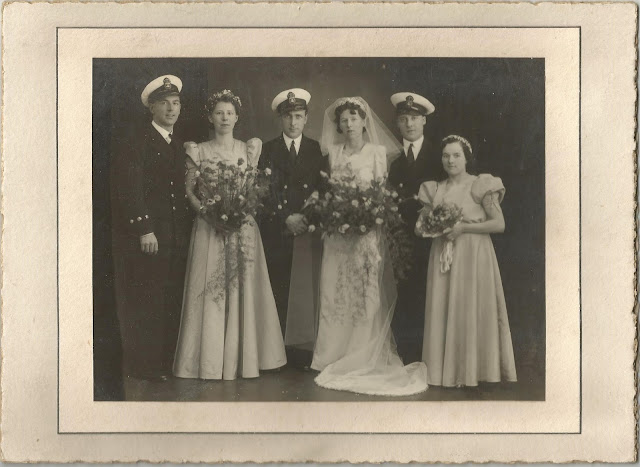 What are your main criteria for buying an album or photographs?

I try to be a bit selective if I can, otherwise I would be totally overwhelmed.  Cost is a big factor, some sellers want top prices and are not prepared to haggle, so we walk away.  For instance, for a Victorian Album with CDV and Cabinet cards, I have a rough price in my head what I want to pay, depending on condition and content and I try to get as close as I can, even though it might seem a very low offer, and always make it clear to the seller that I am a collector and not buying to resell!  The majority are very kind to me, I also give them a card with my Twitter & Blog etc, so they can check me out ! 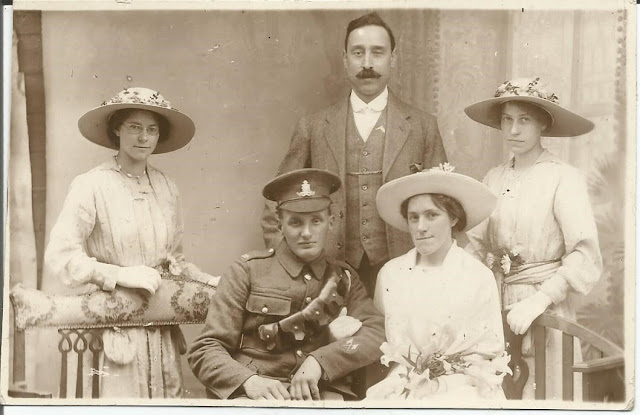 How do you find more information about the subject of some of your pictures?

If I have a name or a place or even both written on the photo, that’s a huge bonus, then I can start searching on Ancestry, Find my Past or Family Search for a start to further the photo’s story.  Also googling the name sometimes brings in great info.  Often though I will ask my followers on Twitter and my Facebook page for help, I have had some super info that way. 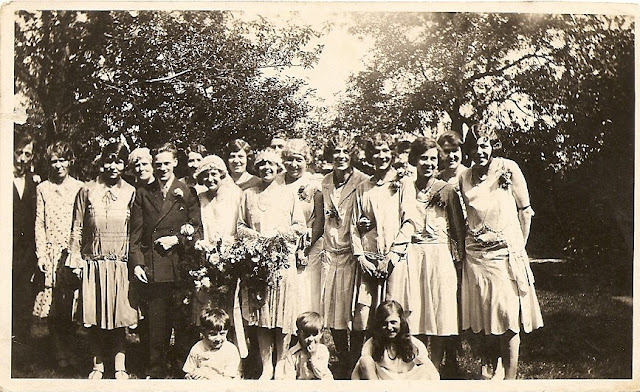 Who is the most interesting character in your photograph collection?

That’s a real tough question, because I find them all so interesting, and even though they are not famous people, they all have a life story, and had their picture taken to capture a moment in time, that can never be repeated.

Have you managed to reunite descendants with their ancestor’s photo?

The Jewell suitcase family is my biggest success, over one thousand family photos returned to the family..In three parts on my Blog.

I have had other success too with smaller finds, and my latest only last week, was one CDV returned to family, will be in upcoming Blog.

Do you have a particular favourite photograph?

I love all my Old Photos, but favourites if I have to choose, would be the wonderful different Wedding photos I have, from various era’s and so many family members included in the majority. 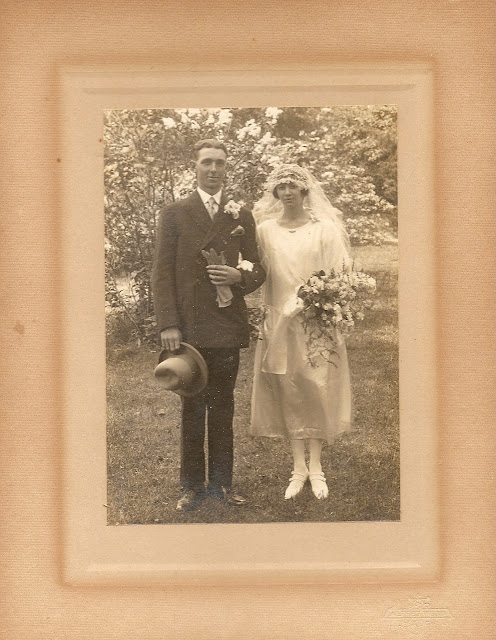 If you haven’t discovered Lynn’s amazing collection yet, please go to one or all of the following sites:

The rise and fall of Joshua Crompton #18thCentury

In a 1950s housing estate on the outskirts of Guildford, there is a tiny trace of the old woodland, once called Gangley Common, where executions took place.  One of those hangings in 1778 was of a man called Joshua Crompton for the crime of forgery. 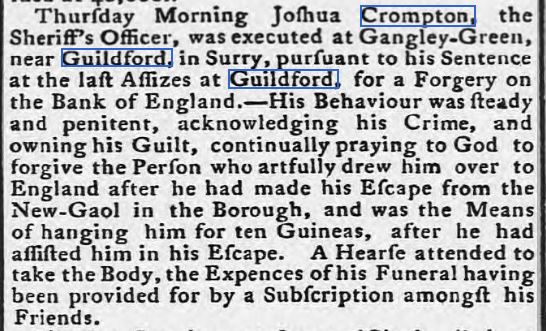 At a time when there were a considerable number of counterfeit notes being circulated, there is no doubt that Joshua was being used as an example to others, but he was also a victim of extremely bad luck and treachery after a see-saw life of prosperity and penury.

Joshua Crompton was the last born child of a family of 15 in Bolton, Lancashire.  After being orphaned at the age of 10, he travelled to Manchester where he found work with a gentleman’s family, eventually becoming their coachman.  Also in the household was the master’s wife’s sister, who in Joshua’s own words, “had conceived a partiality and tenderness to me.”  He encouraged this, resulting in their marriage, which brought him a small fortune.  Returning to Bolton, Crompton opened up an ironmonger’s shop but this failed so he moved to Liverpool where he became a Sheriff’s Officer, a respectable position.
But Crompton, unwisely, became infatuated with a young woman and they moved to London together to open up a shop in Red Lion Square.  Having persuaded his mistress to return to Liverpool and giving up the shop, he was sworn in as an officer to his Majesty’s Palace Court, where he dealt with debtors, but ironically by 1775 he had to quit this position because he was in debt himself to the tune of £1500.   He was also concerned about the delicate state of his wife, who was, “lying in.”

Despite his insolvency he managed to purchase the position of Sergeant of mace, when his actions brought him into more trouble.  Meeting with friends in May 1777, he planned visits to the races at Newmarket, Epsom and Guildford Down.  According to Joshua, his successful winnings at Epsom Downs were put in his pocket book and two days later he needed to buy some new boots.  While in Mr Gaskin’s shop, he was tempted to buy a new gown for his wife.  In fact, he decided on four gowns, giving a twenty pound note for the payment of four pounds, thirteen shillings.  Mr Gaskin needed to change the large note at the neighbouring Spread Eagle and after receiving the balance, Crompton returned to London.

On May 20th Crompton set out for Guildford with his friend Richard Wiltshire but the inclement weather tempted them into a Taproom at Ewell.  There Mr Peckering, the landlord, spoke of the dire experience of his acquaintance Mr Gaskin, in Epsom, who had recently been passed a counterfeit £20 note.  The two men continued to Guildford where they arranged a room at the White Horse before drinking in the Red Lion.  Hearing next morning of the arrival of the Bow Street Runners in the town, Joshua ordered his horse and returned to London where he told his tale to the landlord of the City of Bristol in Wapping.  He managed to board a vessel for Scotland, arriving in Dundee on May 31st.  But two days later, he was arrested there by the Runners who had travelled non-stop in response to a tip-off.
In London, Crompton was examined by Sir John Fielding and confined in the new prison at Clerkenwell, before being moved to Newgate prison.  He had given testimony against three other men who had assisted him, including a leading Tea-dealer near Tower Hill and his friend Richard Wiltshire, who was apprehended.  Prior to his trial in Surrey, where the offence took place, Crompton was moved to the new gaol, Southwark.

At this point, his friend, Francis Crooke suggested the possibility of escape.  Dressed in woman’s clothing he walked boldly out of the gaol and later he crossed the sea to Flushing in Holland.  There he picked up his life and was doing well in the smuggling business, but Crooke suggested he return to England, saying that he had obtained a pardon for Joshua.  In reality, the aptly named Crooke had negotiated a two hundred pound reward from the bank and one hundred from the gaol Keeper.

On July 29th 1778, Joshua was taken to Guildford for the trial.  Several witnesses gave convincing accounts that he had knowingly presented the note but there was no evidence that he was responsible for the forgery. Crompton was declared guilty and was condemned to death.  Showing penitence and forgiveness, Joshua Crompton was hanged at Gangly Green, Guildford on August 24th 1778.
at June 01, 2016 2 comments:
Email ThisBlogThis!Share to TwitterShare to FacebookShare to Pinterest
Labels: 18th century, Bow Street Runners, crime, forgery, Guildford, hanging, history, local history, public execution, social history
Newer Posts Older Posts Home
Subscribe to: Posts (Atom)