A visit to #Chinatown in Singapore during October 1966

In 1966, my family arrived in Singapore to live there for 3 years.  My mother kept a diary and this is her description of a night tour of Chinatown:-

We met Mr Lim and the rest of our party at the Raffles Hotel at 7.30 pm.  Using his microphone to keep our attention, he walked us to the bus stop to catch the number 11 bus to Sri Mariamman Indian Temple, the only part of the square mile which isn’t Chinese.  The sculptured figures on the building were wonderful.  Inside they were starting the celebrations for Deepavali (divali). On November 11th, four British soldiers will join the devotees to walk across hot coals.  Burnt feet will reveal whether they are sinners. 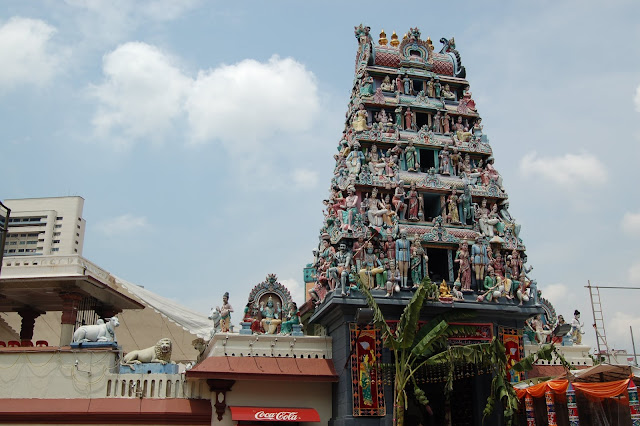 The inside of the temple was beautifully decorated with coloured streamers like Christmas paper decorations and we listened to the chanting.  In the courtyard, various altars are set up, including one which is the head of a man.  The story goes that a king would not give his people their freedom, even in spite of his son’s pleas, so the boy, the king’s only son, cut off his own head and in a sign of repentance the King gave the people their freedom.  Another altar is for baptism.  They say that the child is given to the temple to keep for one month and then redeemed for money, but in fact only the child’s soul is left at the temple.  This would guarantee that if he died young his soul would go to heaven.  There is a huge tree where other altars are set up with burning lamps.  If you walk around the tree three times and say a prayer you should have good luck.  In Penang a similar tree was cut down and the area was flooded for a month. 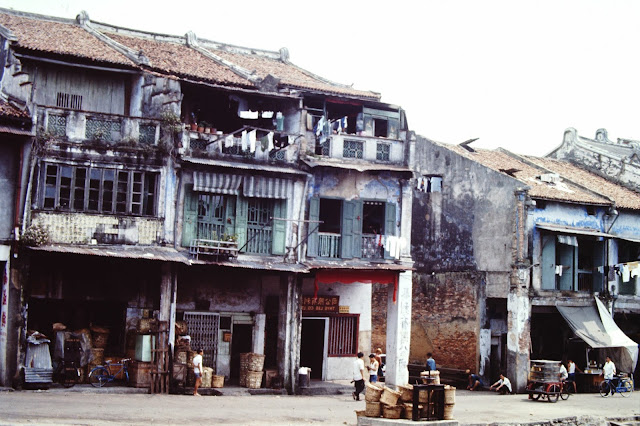 Next we wandered along the grubby Chinese streets, lined with food stalls.  Each different Chinese group (Cantonese, Hokkien, Hakka) keep to their own area.  One large building, originally built by the Portuguese, houses over 1000 people.  It is split into tiny cubicles for each family, the children sleeping under the bed.  One tap and toilet is shared by many families and there is nowhere to cook, hence the reason for so many roadside food stalls.  All kinds of food are available, including monkey soup or monkey brains to make you strong, or frog to improve your eyesight.   There are tiny cages of rabbits, guinea pigs, iguanas, snakes, duck, chickens etc.  One delicacy we were offered was a hundred-year-old egg from a jar.  If anyone was pregnant and wanted twins, then eating two was recommended.  Also hanging on the stalls were smoked pork, sausages, entrails and pigs’ ears.

Century eggs or thousand year eggs are a great Chinese delicacy. Traditionally the eggs were pickled in brine, and then buried in a mixture of coals, chalk, mud and alkaline clay. Although no recipes keep the eggs for a hundred or even a thousand years, the curing salts do mean that the egg is preserved for many months, without need for refrigeration. The century eggs have a translucent, jelly-like, greenish-black egg-white, and a deep blue yolk, with a slightly cheesy, fermented flavour. The outside of the white sometimes develops a stunning pattern, reminiscent of snowflakes or the branches of a pine tree, which gives rise to one of the egg's Chinese names - songhua dan, or pine-patterned egg.

In the People’s Market anyone can set up a stall, if there is a space, and for one month pay no rent, rates or tax.  Clothes, shoes, fabric and toys are displayed for sale all night.  This is similar to the Amah’s Markets which are set up in the streets around Singapore in different places most evenings.

Above some of the shophouses live the Concrete Nannies (Samsui Women).  They do hard labouring on building sites for very little pay, wearing blue samfoo (blouse and trousers) and large red hats of starched cloth, not unlike an upturned nun’s hat.  They rarely marry but sometimes adopt children.

As of 2014, there are only two Samsui women known to be living in Singapore.  Samsui women wore a red, or sometimes blue, headdress that became their trademark feature. The headdress was a square piece of cloth starched stiff and folded into a square-shaped hat. The colour red was used because it was eye-catching and thus reduced the chances of accidents occurring at the construction site. Besides sheltering the women from the sun, the hat was also used to store items such as cigarettes, matches and money. In the end they would chat to each other along the five-foot-way corridors outside the shophouses. 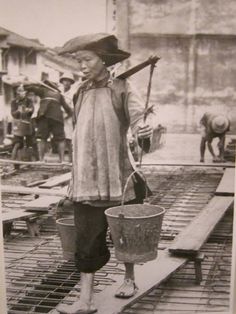 It is certainly an eye opener to see how they live in Chinatown.  The squalor and overcrowding has to be seen to be believed.  In Sago Lane we peeped into Opium dens, where tiered bunks were filled by old men who could pay a dollar for a pipe and a dream.  Many have been shut down by the government but some remain to cater for the few who are beyond hope and can’t live without it.

Also in Sago Lane are the Death houses.  In the upstairs part of the houses are clinics for the very old and chronically sick to come to die.  They fear post-mortems if they die in a hospital and dying at home brings bad luck to their family.  Downstairs, the deceased lie in state with photographs, fruit and flowers.  The chief mourners wear sackcloth over their heads and bodies, while others sit at tables on the street, drinking.  The wreaths are on stands outside, huge ones of orchids, tuber rose heads etc.  In nearby shophouses, paper models are made, of houses, cars, boats etc to be burned after the funeral to ensure the deceased will have use of them in the next life.   Imitation paper money in abundance is also burned so that they can bribe themselves out of Hell.  The funeral for anyone over 60 is a celebration and there are Chinese lanterns bearing their age in characters.

In another street they were still celebrating 5 days after a funeral.  Five priests dressed in yellow or red robes with black mortarboard style hats were dancing frenetically around a small fire.  In a woodcarver’s shop, temple ornaments were being carved from blocks of sandalwood and then ornamented with gold leaf.

Mr Lim lead us uphill to Millionaires’ Club where 24 millionaires live.  Here could be found professional letter writers sitting at tables by the side of the road.  Everywhere Mr Lim just held up his hand and walked in front of the traffic expecting it to stop.  A memorable evening.

At the weekend I rediscovered one of my favourite books lurking in the attic.  It was a present from Santa Claus in 1958 and has rather a boring cover. 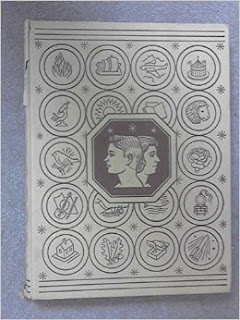 The writers of "Odham's Encyclopaedia for Children"  are not credited but its three advisory editors included  the Professor of Comparative Education at the University of London Institute of Education and the former Headmaster of Harrow School.  The book is described as, "an Aladdin's cave stuffed not with jewels but with facts, more marvellous than jewels but no less precious."

Filled with pictures and diagrams it really was a delight in the black and white world of the late 1950s.  These are the chapter headings:- 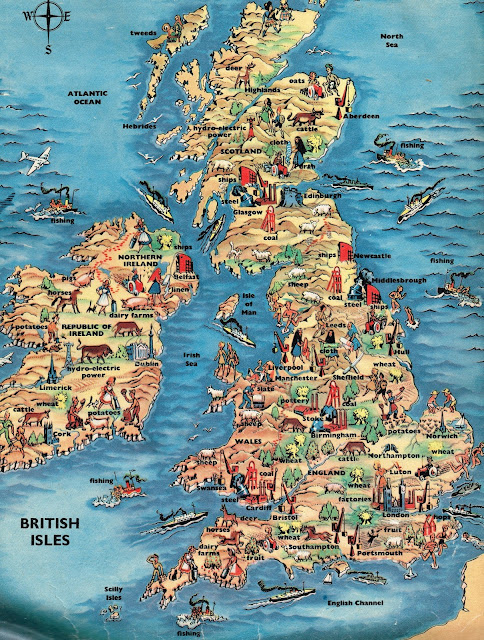 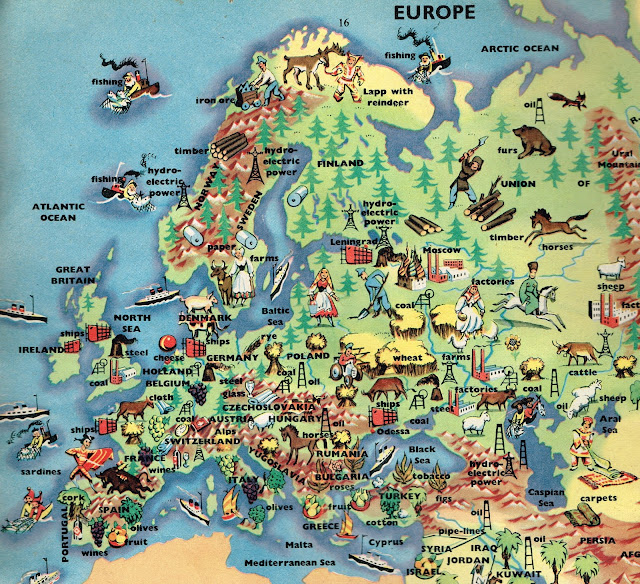 Note the industries of Britain shown above:- coal, steel and ships! 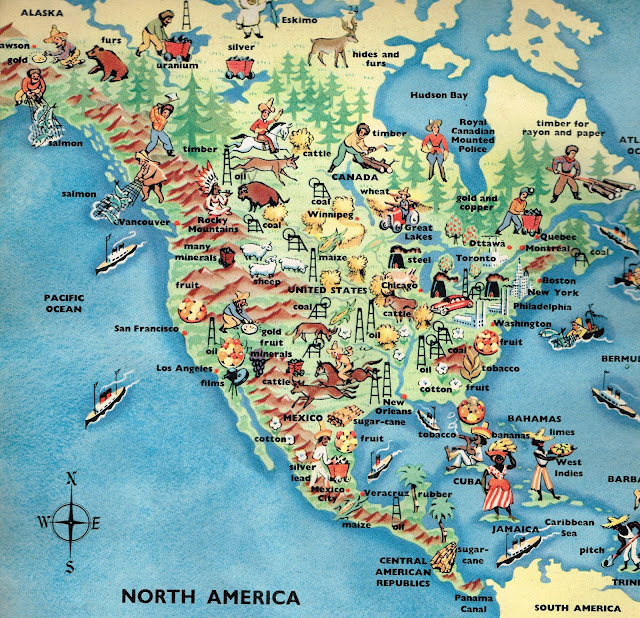 How our mind and body works.  This shows good and bad memories. 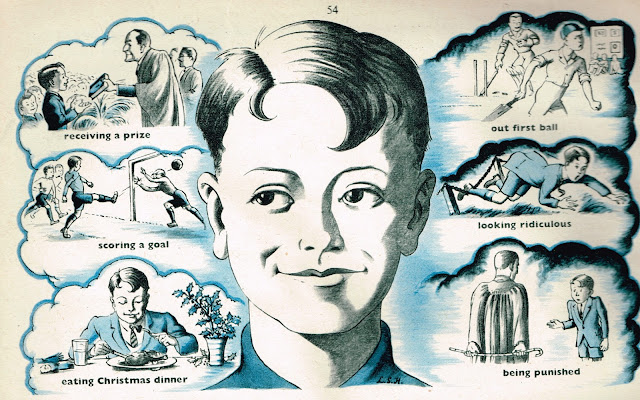 And the vehicles of the time have been drawn. 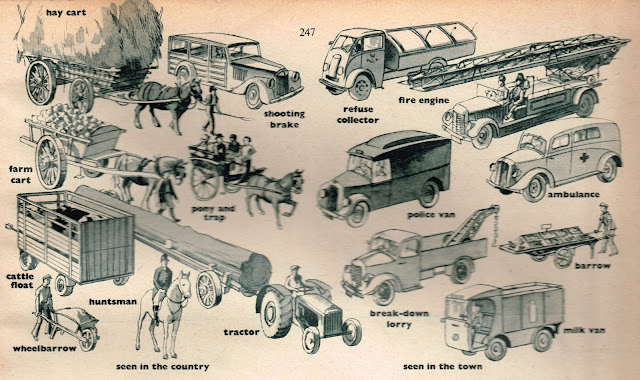 But the most beautiful illustrations were painted by John Rignall (1916- 2004) who also designed brightly coloured nature posters for schools and illustrated books about birds. 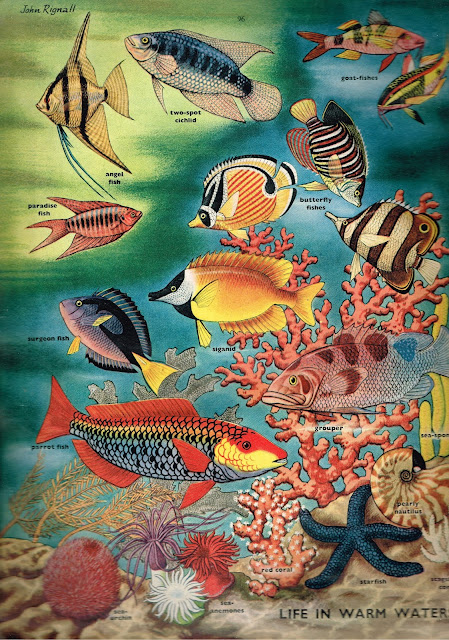 Little did I realise that my brand new encyclopaedia would be a source for social history 50 years later.

On a cold winter’s evening at the end of December 1903 Emma Fricker took a cup of coffee to her husband, Eli, while he was working in the stable which was next to their home in Friary Street, Guildford.  He was a carman, working for Mr Charles Holden, grocer.  It was necessary for groceries to be delivered regularly, by horse and cart, to the larger homes on the outskirts of town.  At 9.20pm Emma heard a noise from the stable and when she went to investigate, she found her husband unconscious, lying on his back close to the hooves of one of the horses.  Two of her neighbours carried Eli, who was bleeding from a head wound, into the house but although he groaned he did not regain consciousness.  By the time he was seen by a doctor he had died aged only 41. 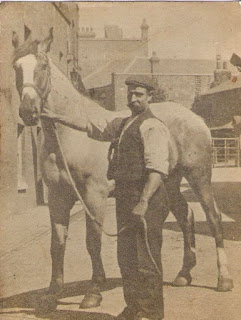 Visiting Friary Street today, you will see only shops and restaurants and most of the original buildings have been destroyed, but at one end there is a trace of the houses dating from before the time when Eli and Emma lived there with their 9 children.  Another employee of Mr Holden, Thomas Lee, told the borough Coroner that he had shared a beer with Eli Fricker at 8.50 that evening in a nearby beer house and that he had warned him about one of the horses, which was prone to kick, when he returned to the stable.  All agreed that Eli seemed strong and healthy and his skull had not been fractured but his heart was in a bad condition and he was said to have died of syncope. 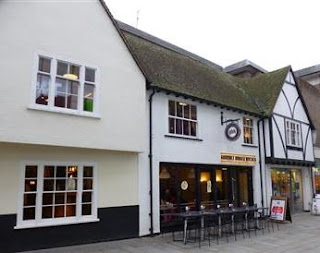 Mr Holden was generous to the grieving widow as Eli had been an exemplary employee and a concert was organised in the Constitutional Hall to raise funds for the Fricker family.  Despite this generosity it must have been very difficult for Emma to support her children.  Eli’s last child, Agnes Rose Fricker was born in February 1904, 6 weeks after her father’s death.  By 1906 Emma had moved to the Shambles off the High Street. Her 9-year-old son Charles Henry Fricker had been sent to Dr Barnardo’s and in 1905 he had sailed on the SS Dominion with a group of British Home Children to live in Ontario, Canada.  Her younger son William John can be found in 1911 as one of 1073 boys at the Royal Navy Training Establishment in HMS Ganges, Shotley, Suffolk.  Meanwhile most of her daughters went into domestic service. 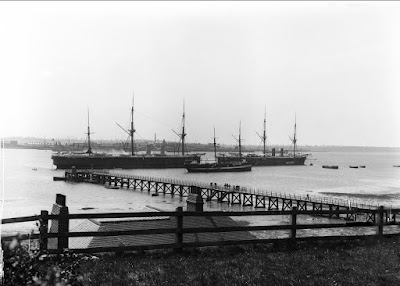 But this was by no means the end of their stories.  Emma remarried in 1906, becoming Mrs Strange.  Charles Fricker married Pearl Teskey in 1914 and they had ten children.  He died in North Bay, Ontario in 1973.  He had been joined in Canada by his brothers Albert and William and also by his mother Emma and all three also died in Ontario.  William John Fricker had a particularly successful life.  He moved on from training school to the navy throughout World War One and was promoted to officer status in 1918.  After visiting Canada in 1923, he returned to Guildford to marry Amy Ann Lefevre in his smart naval uniform.  Lieutenant Commander William Fricker received the King’s Silver Jubilee medal in 1935 and served with the Canadian navy during World War Two.