Every day I love to look at the old photographs which Lynn Heiden uploads to Twitter and Facebook as they give us a fascinating window into the past.  Often she is able to trace details of the lives of the people in the photographs, using census returns, trade directories etc.but sometimes there just aren't enough clues.  I was particularly struck by this group of unknown children so just for fun I thought I'd make up character sketches of them. 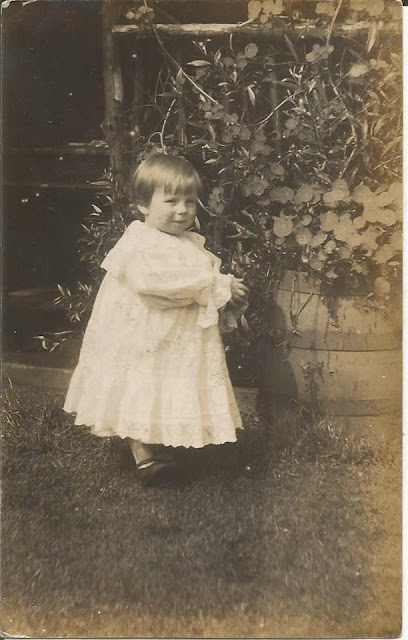 Teddy was born early in the century, a much loved second child after the death of his brother.  Photographed, age 2, he is yet to be breeched so his mother has dressed him in a spotless, lace edged frock, cleaned and pressed by the maid, but he can’t resist trying to slip off his uncomfortable shoe.  Later his sister Muriel will be born, but he will always be his mother’s favourite and she is so glad, that just as he is about to be sent to France to fight, the “war to end all wars” ceases.  Sadly he decides to become an army officer and dies early in the Second World War, leaving a wife and four children. 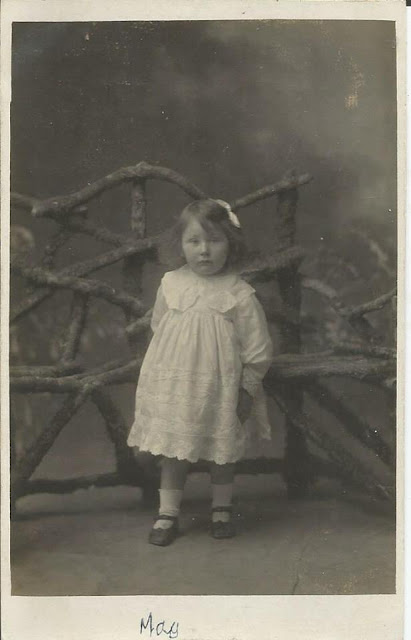 Little May is very nervous, as she stands leaning against the wicker contraption in the photographer’s studio.  Why does she have to stand so still in front of that strange “camera” and why has the man hidden behind a tablecloth?  Ma says, “It’s for Da.  He’s gone a long way away to “fight for his country” and we need to send him something to help him remember you.” 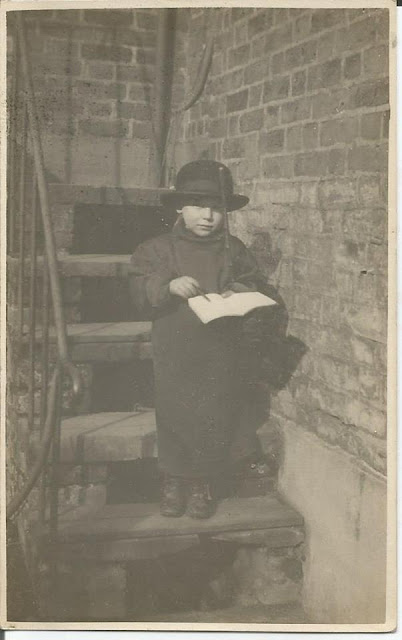 Stanley has always been a character.  Almost as soon as he was born he had a dirty laugh and he loves to take off people he knows, in his broad accent.  Borrowing his Dad’s pullover and his best hat and umbrella Stanley is trying to look like the rent man who comes round weekly, licking his pencil and writing down the payments, so he’s using his copy book as a prop. 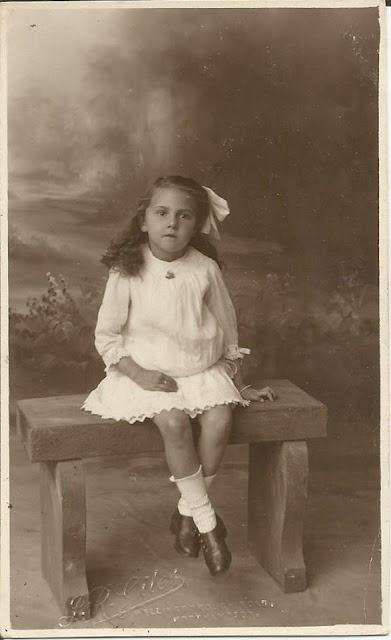 Connie is usually happy.  Mother takes her everywhere, whether it is helping at the church bazaar or going to buy a yard of ribbon at the haberdashery shop.  Her brothers have gone away to boarding school, but Connie goes to a small local school with other little girls.  She likes the scene behind the bench in the photograph, as it is the largest picture of the countryside she has ever seen.  Soon Jim and Georgie will return for the holidays and she can run after them through the fields. 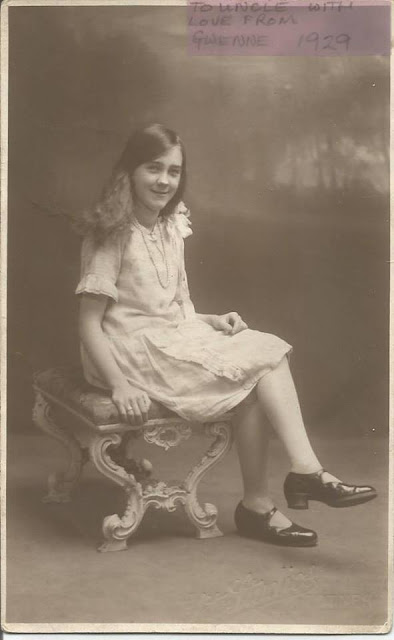 Gwenne was born just after World War One when her father had returned from the war.  Daddy was always very quiet and would frequently disappear for long walks.  Gwenne can’t remember seeing him smile, although Mummy said that he used to love taking her dancing.  He died two years before this photo was taken but Uncle Fred, Mummy’s brother, has always been more like a father to Gwenne.  He’s nor married so he always comes to Gwenne’s house, every week, for Sunday lunch.  Ten years later, he will give her away in marriage to young Hugh whom she’s known all her life.  Hopefully when Hugh goes to war in 1940 it will not change his life as drastically as it did to Gwenne’s father. 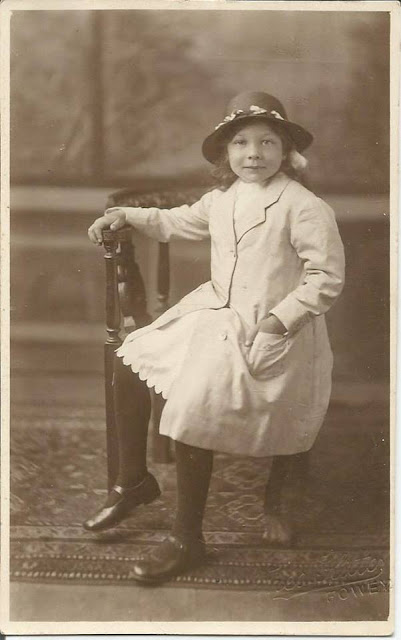 Elsie was born in London.  She has two brothers and two sisters.  She is the middle child but she is also the boss.  She looks after her youngest siblings while her mother does the laundry and housework and she expects her big brothers to do exactly what she tells them.  As soon as she can, she wants to help her father run his stall in the market.  She has the voice and the confidence to attract customers to the, “lovely juicy apples” and she loves the jolly atmosphere in the market street.  It won’t worry her that she will need to be up before dawn to fetch the produce and she is prepared to work hard.  One day she might have her own shop.

Please visit Lynn's Waffles to see her research on other pictures from her collection.
at September 15, 2016 1 comment:
Email ThisBlogThis!Share to TwitterShare to FacebookShare to Pinterest
Labels: 20th century, childhood, old photos, social history

The Palace of the Dukes of Cadaval 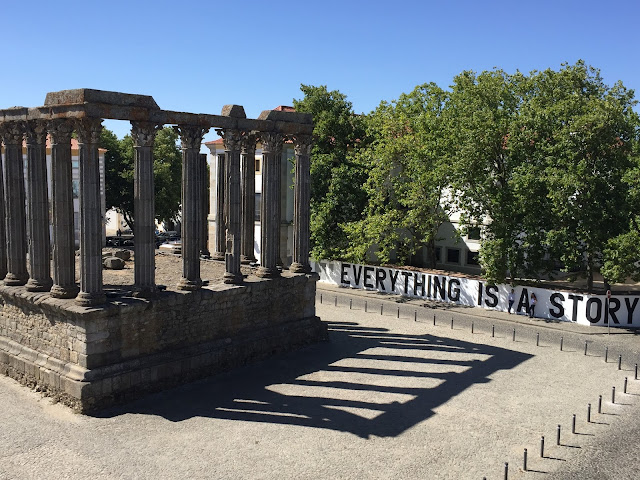 If you are ever lucky enough to visit the UNESCO Heritage city of Evora, in the Alentjo region of Portugal, don’t miss visiting Cadaval Palace.  Sited opposite the remains of the Roman Temple and near to the Cathedral you might feel you have had a cultural overload, but the charm of the palace is its homeliness and beauty. 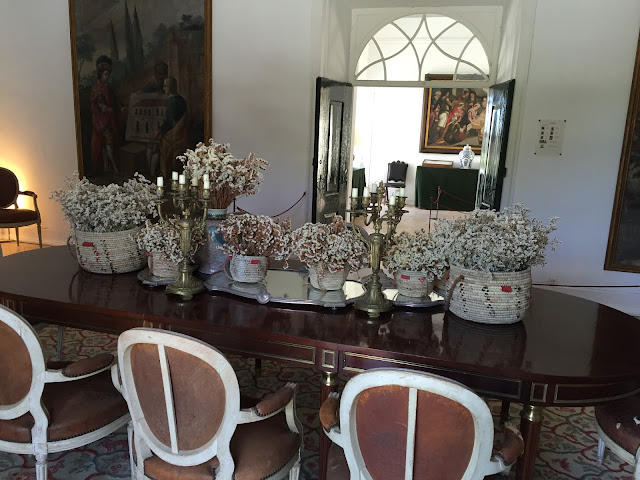 The present house dates from 1648 when it was built on the site of the original medieval castle, it is now a large stately manor house adjoining the Loios Church.  Its style is a blend of Gothic, Moorish and Manueline architecture.   The latter can be seen in the Belem Tower at Lisbon.   Above the house is the Tower of the Five Shields named after the coat of Arms of the Cadaval family which shows 5 shields on the background of a St Andrews Cross.  The Cadaval Duchy dates from the support given by the family to Portugal’s independence from Spain in the 17th century.  They are a branch of the Braganza family. 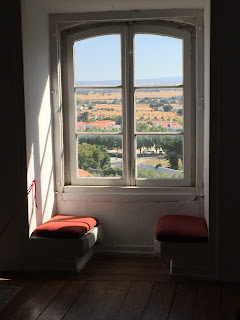 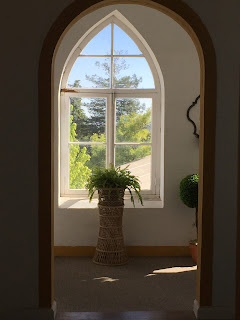 The palace was the temporary residence of several Portuguese monarchs of the Alfonsine dynasty. The third Duke of Braganza was imprisoned here before his beheading in 1483 for plotting against King John II.  On a more cheerful note, Vasco da Gama was commissioned at the palace to command a fleet to discover the sea route to India round southern Africa.  The present representative of the family, Diana Alvares Pereira de Melo, was married in Evora cathedral to Charles Philippe, Prince of Orleans, in 2008 and they held their Reception in the Palace. 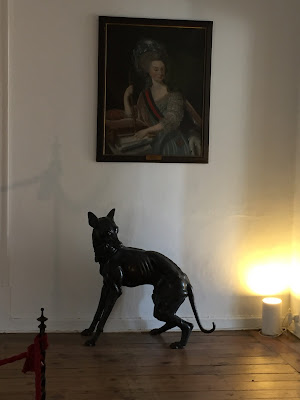 Inside the Palace, visitors can see a gallery of ancient documents and the bronze tomb of Rui de Sousa who signed the treaty of 1494 dividing the world into Spanish and Portuguese spheres of influence.  There are many beautiful old paintings but there are also exhibitions of contemporary art.  While we visited I particularly liked the “Passion of Poissons” gallery. 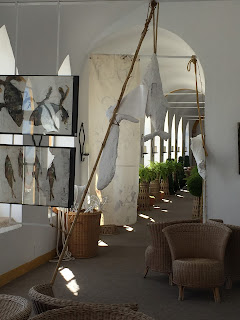 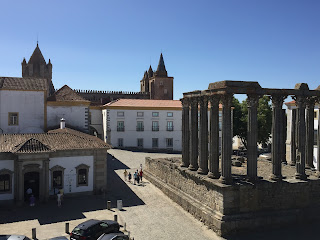