Courage and Carnage- The taking of the Telemaque in 1757

Amongst the treasures we found in my grandmother’s chest brought with her when she moved from Rotherhithe, hidden under the photographs and post-card albums, was a 16 page document with an accompanying letter.  This was addressed to Admiral Sir Edward Hawke and the text is the narrative of the career of an unnamed naval officer.  By examining the detailed testimony I was able to find the ships, with dates, on which he served and after searching through the Ship’s musters at Kew, I was able to establish that the author was John Strachan.

John Strachan was the son of Patrick Strachan Physician of Greenwich Hospital.  He wrote of his previous career during a period in the 1760s when he had no post and therefore no income.  His exciting and detailed description tells of his actions during the Seven Years War. Today I am concentrating on an event on July 8th 1757 when Strachan was Captain of the Experiment.

In 1757 the merchants of Marseille were frustrated by the blockade of their port by British ships so they used public subscription to pay for 5 large privateers to be fitted out for their protection.  The largest of these was the Telemaque commanded by Commodore M. Beaupart de Contrepont.  On seeing Strachan’s vessel, the Experiment, off Alicante, the Commodore decided to engage with the British ship, knowing that it was smaller and had fewer crew members aboard.

John Strachan wrote;  the Commodore,
“had upwards of 460 men; his Order of Battle was, his ships being longer and higher than mine, to lay me, alongside; and to board me in that position.”
As the Experiment had a crew of only 142 men, they appeared to be in considerable trouble, but hoisting his Colours and giving three cheers, Strachan fired three of the foremost guns into the Telemaque at pistol range, as it approached, and then put his “helm hard to Lee, laying the Experiment under the Bowsprit of the Talemache” (Telemaque).

This meant that only a few French soldiers at a time could board the Experiment, making combat easier for the British sailors.  There were, however, 14 killed and 30 injured from the crew of the Experiment.
“The Captain of the (French) soldiers, a fine brave fellow, jump’d on my Quarter Deck and received his death from me by a pistol shot.  I closed in with my Marines to the main Shrouds; there and on my Decks the French suffered.”
Strachan then ordered Lieutenant William Locker to take a party aboard the French ship.  With “briskness and alacrity”, he obeyed.  Down came the French colours and the Telemaque was captured.  The French had also lost at least 125 men, killed in action and many were injured.  Locker described events in a letter to his uncle:-

Captain Strachan sailed to Gibraltar, Lieutenant Locker sailing the Telemaque.  Despite the heroism of the officers and crew of the Experiment, there was no public acclaim or award given for the capture of the ship, perhaps because the Telemaque was a privately funded Ship of War rather than part of the French navy.

In later years William Locker gained fame as the mentor of Horatio Nelson, who wrote,
"I have been your scholar; it is you who taught me to board a Frenchman by your conduct when in the Experiment; it is you who always told me ‘Lay a Frenchman close and you will beat him;’ and my only merit in my profession is being a good scholar. Our friendship will never end but with my life, but you have always been too partial to me."

In 1765, after further naval service and personal illness, John Strachan became a baronet and he died in Bath in 1777 leaving the baronetcy to his more famous nephew Admiral Sir Richard John Strachan.

The last bulk shop in London

Mention “bulk shop” to anyone today and they think of ordering large quantities of goods online, but the original London bulk shops were built to replace the dangerous jettied shops after the Great Fire in 1667.  Since goods could not be displayed behind leaded panes, shopkeepers were to use hinged shelves or counters attached to the shop-front, rather than using stands which took up too much of the path.  Above the shelf they were later ordered to maintain a roof, at least half way across the footpath, to protect pedestrians from rain.  Soon they were directed to allow paupers to sleep under these roofs and the narrow eleven inch shelves were replaced with twenty inch ones so that the beggars did not roll off during the night.

There were many of these bulk shops in the area of Temple Bar to the north of the Strand and several were bookshops.  The Old Fish Shop at the top was taken over by Reeves and Turner, booksellers, but the building came down when Temple Bar was removed. The last bulk shop, a poulterer's in Clare Market, was destroyed in 1878.

Thanks to the Illustrated Police Times I have discovered one of the dangerous escapades endured by a policeman in Victorian Kings Lynn. 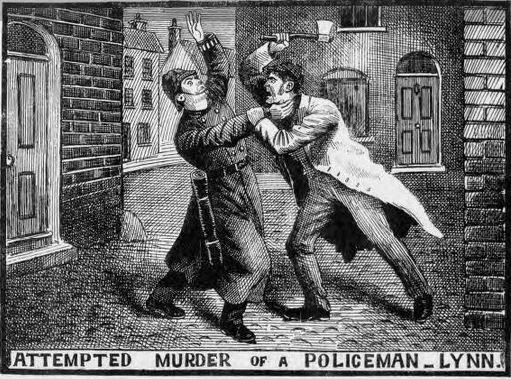 In December 1889 there were a series of thefts of chickens around the town of Kings Lynn.  Chief-Constable Ware decided something should be done.  A number of his constables dressed in plain clothes and were stationed near the places where the fowls were accustomed to roost.

PC Rayner secreted himself in one of these premises and later that evening Robert Pitcher, a carpenter entered and struck a light in front of the policeman.  He admitted his purpose was to steal a fowl and he was arrested.  However on the way to the police station, he drew a hatchet from his pocket and struck the officer, “some fearful blows upon the face.”  Bleeding profusely PC Rayner struggled with the thief and managed to blow his whistle.  Aid soon arrived and the, “brutal fellow,” was taken into custody.