Many of the postcards in my grandmother's collection were really notecards for sending a quick message to a friend.  Usually arriving on the same day they were posted they could be compared to a text or WhatsApp today but perhaps more like Instagram since they include an entertaining picture.

In 1903 my grandmother was 19 years old, the youngest daughter living in Rotherhithe with her parents.  The family were able to have one servant and unlike her mother thirty years earlier, Connie did not have to work.
She had a busy social life meeting her friends, going to the London theatres and staying with relations in the country.  Sometimes the shortened phrases are rather cryptic.

Many of the cards are from an unidentified friend called Mal.

Three Little Maids was a musical at the Apollo Theatre.

This card was posted locally and Mal was planning to catch the bus.

This exhilarating card came from Mary, who wrote more formally.

Laura wrote from Bournemouth, so has sent a friendly greeting.

And finally Connie didn't post this card. perhaps because it was inappropriate!

Lance Thackeray (1870 - 1916) was a gifted artist who specialised in beautifully drawn comic scenes. Thackeray was a founding member of the London Sketch Club.
Louis Wain's early cat pictures were very popular despite their wild eyes.
You can read the history of the postcards of Raphael Tuck and sons here 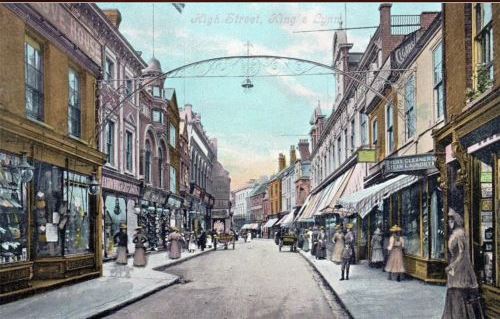 Early on a Monday morning in April 1869 George Coker, an apprentice chemist, collected the key to Albert Langford’s Chemist and Druggist’s shop in King's Lynn from Mrs Mary Ann Langford, in her kitchen.  But soon he realised that this was not a normal day.  He discovered that Albert Langford, who had suffered from declining health for over a year, was now experiencing convulsions and facial twitching.  Dr Lowe, who knew the family, was summoned and as he attended to Albert he realised that Mary Ann Langford was also unwell.  Becoming very excited she grabbed the doctor’s hand saying, “Dr Lowe I have poisoned myself.”  “With strychnine?” asked the doctor. “Yes, and I have poisoned them,” she replied before succumbing to a violent convulsion.  Immediately Dr Lowe sent for a stomach pump and requested Dr Archer to aid him.  He also went into the shop downstairs for an emetic to treat Mrs Langford.  Only then, did he spot baby Charlotte in the arms of her sister.  Just 4 months old, she was evidently suffering the same symptoms as her parents.  By the end of the day, Charlotte had died. 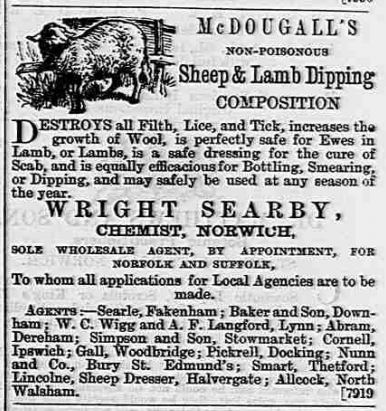 Local people were stunned by these events.  Albert, like his father and brother, was an established chemist and druggist and well respected in the community.  Mary Ann, who had,” been very pretty,” was now, at 38, a mother of 8 young children and occasionally helped out in the shop; more so since her husband’s ill health.  Worried that the business was declining, she had dispensed with both her servants, adding to her considerable workload.  Since the birth of her last child she had been severely depressed and despondent and experienced severe head pain.  Her guilt seemed inevitable when a packet of white powder found in her dress pocket proved to be strychnine. 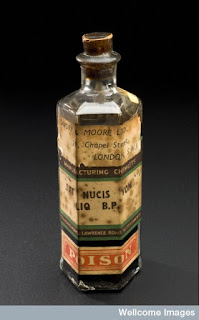 Strychnine was used as a poison for rats or birds and was sold by a chemist and druggist, being kept in sealed bottles or, once opened, within a drawer.  It affected nerves in the spinal cord causing increased sensitivity to sensory stimuli and inducing convulsions.  Death usually occurs within two hours as a result of either suffocation by paralysis of breathing or by exhaustion.  Doubt was raised in this case, since Charlotte lived for 6 hours while her mother recovered completely.  Albert Langford was nursed for 10 days before finally dying, although his convulsions had ceased.

Although reluctant to arrest Mary Ann, George Ware, Superintendent of Police took possession of sealed jars containing the contents of Charlotte’s stomach to be delivered to Dr Letheby at the London hospital for analysis. 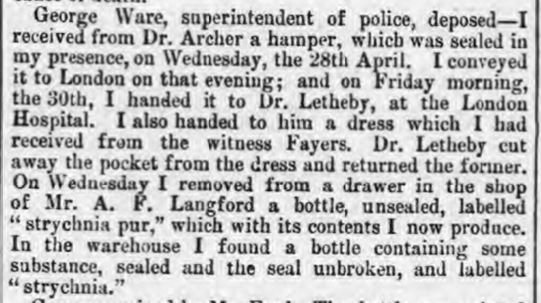 Mary Ann was remanded in custody at Wymondham Bridewell where she tried unsuccessfully to commit suicide.  The trial was held in Norwich where Mrs Langford appeared in deep mourning.  Dr Letheby told the court that he had been able to kill a frog with the contents of the baby’s stomach.  It was suggested that Charlotte might have ingested the poison via her mother’s milk but this was dismissed since Mary Ann would have died if she had consumed enough strychnine to pass on to her daughter.

Character references were given of Mary Ann’s affection towards her children and exemplary manner to her husband, even when he suffered loss of power, numbness in his limbs and incoherent speech.  Dr Lowe told of an appointment he had with the family on March 30th when Albert’s wife and mother implored him to admit Mr Langdon into an asylum but despite his weakness and loss of memory, Albert spoke rationally and, being no danger to himself or others, was not committed.

After evidence was heard from all those present on the day of Charlotte’s death, Mary Ann Langford was acquitted of murder since she had been,” of unsound mind,” when administering poison to her child.  Prosecution against her for murder of her husband was then abandoned.

Two years later Mary Ann Langford and her seven remaining children can be found on the 1871 census living just round the corner from their former home.  Mrs Langford is listed as an Annuitant which suggests some form of insurance or pension resulted from her husband’s death.  This must have been a relief since all of the children were still at school and the eldest, Edward had suffered from paralysis since birth.
at March 09, 2016 5 comments:
Email ThisBlogThis!Share to TwitterShare to FacebookShare to Pinterest
Labels: #blog, 1869, chemist, druggist, Kings Lynn, local history, Lost in the Past, poison, social history, Victorian
Newer Posts Older Posts Home
Subscribe to: Posts (Atom)