Throughout most of the 19th century public executions were carried out on the rooftop of Horsemonger Lane Gaol in Southwark, where the crowd could watch from below.  On January 10th 1831 it was the turn of James Warner from Albury, Surrey to be hanged for arson.  It was believed that he was one of many farm labourers in southern England who had turned to crime to express their anger at low wages and unemployment. 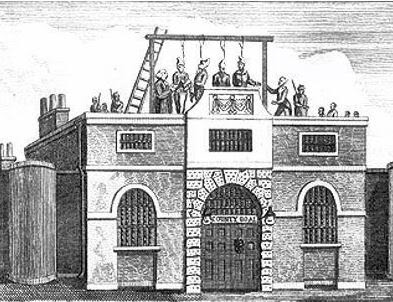 During the Napoleonic Wars there was a great demand for corn and a shortage of labour but after the war ended in 1815, prices slumped and the returning soldiers flooded the job market.  To add to the pressure on rural workers, new mechanised threshing machines took the place of manual threshing with a flail.  Things came to a head after two bad harvests in 1829 and 1830.  Threatening letters were sent to landowners and clergymen by the fictional Captain Swing.  Many respected people, such as William Cobbett felt there was need for electoral reform and better provision for the poor. 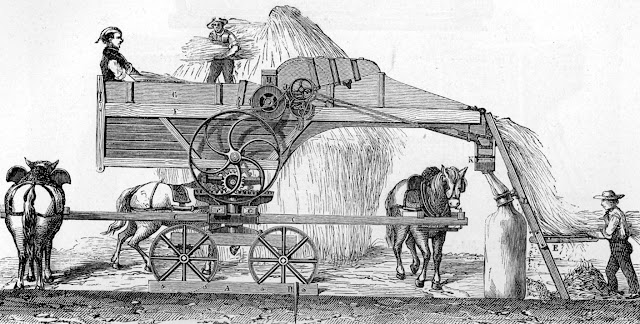 But did James Warner act on behalf of his fellow agricultural labourers or was he expressing a personal grievance?  James Franks, the tenant of a corn mill in Albury had employed James Warner, but had sacked him in 1828 after accusing Warner of beating his horse.  At his trial for, “wilfully and maliciously setting fire to a flour mill at Albury,” Richard Tidy, another employee, reported that James Warner had told him Franks would, “get no good by it; he will get served out for.”

On the evening of November 13th 1830, Mr Franks had been entertaining friends in his house next to Albury Mill.  At 4.30 next morning he was woken by the sound and sight of the mill going up in flames.  Going downstairs to see what was going on, he escaped the shattering of his bedroom window by shots from a gun loaded with horseshoe nails, pieces of flint and small pebbles.  The flames showed the figure of a man in a brown frock coat running away from the fire across the neighbouring land of Mr Smallpiece.  Henry Franks, brother of James, and several other witnesses, were able to describe the man, who was easily identified as James Warner.

It was also revealed at the trial that Warner had been drinking in Guildford on the previous evening and he had complained of greedy employers to witnesses, Richard Moore, a painter, Matthew Mansell, a blacksmith, George Wilkinson, a carpenter and James Challing, a sawyer.  His final statement was that if you held a grudge against someone you should act secretly and alone, and that they would learn something of great importance in the morning.  Warner drank at the Queen’s Head and the White Hart all evening before walking to Albury with barmen Thomas Myon and James Niblett, who contacted the police after the fire.  Searching his house, the authorities found a brown frock coat and a recently fired gun.  A full bench of magistrates at Guildford House of Correction committed Warner for trial at Kingston assizes.

On January 1st 1831, the jury rapidly convicted of Warner of arson, although the charge of shooting at Franks was dropped.  But when the judge put on his black cap and sentenced him to death, many thought the penalty too harsh.  He was to be an example to others who protested with violence about their poverty.  In the words of the judge, “You meant to urge others to the commission of crimes, which have of late become so lamentably prevalent and which nothing under God’s providence but the strong arm of the law can check and repress.” 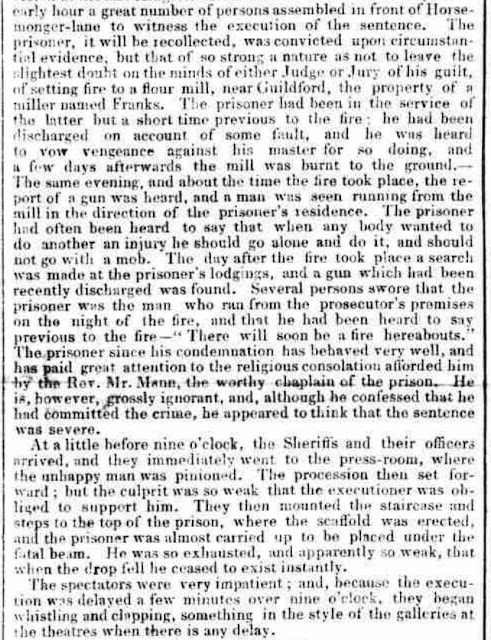 On 8th January 1831 the magistrates at Guildford and Clandon sent letters to the Prime Minister stating that there was evidence to implicate other local people in the crime.  It emerged that on 14th November 1830, the day before the fire, the Home Secretary had received a letter, stating that James Franks had become, “odious to the people when he was lately the overseer of the poor.”  A note was later found near the workhouse in Guildford which said, “Warner is murdered.  Franks, Drummond and Smallpiece shall die….. I could clear him at the place, you false-swearing villain. We fired the mill.  Starving and firing go together.”

Although James Warner was the only agricultural protester to be executed in Surrey, 18 others were sentenced to death in other parts of the country between 1830 and 1832.  505 men were transported to Australia and 644 were imprisoned.  In 1832 the Reform Act was passed in Parliament and in 1834 the Poor Law Amendment Act established a network of inspected Workhouses.  And yet the case of the Tolpuddle Martyrs was still to shock the country in 1834.

For interesting sources about the Swing disturbances go to this page on the National Archives   http://www.nationalarchives.gov.uk/education/politics/g5/