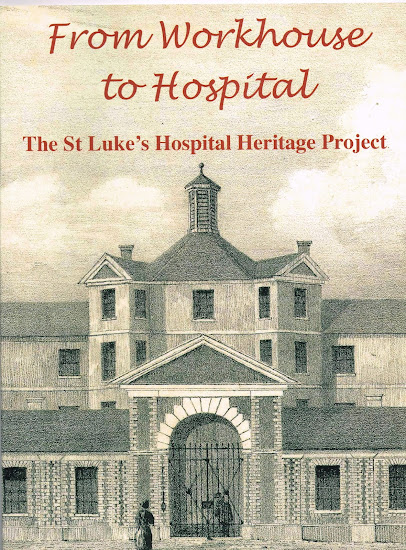 I was pleased to be asked to blog about my favourite museum for Mainly Museums.
Please follow the link to read more.
https://mainlymuseums.com/post/896/the-spike-museum/
at August 16, 2021 No comments:
Email ThisBlogThis!Share to TwitterShare to FacebookShare to Pinterest
Labels: Museum, Poor, Workhouse, World War One

Snapshot of a Workhouse in 1901 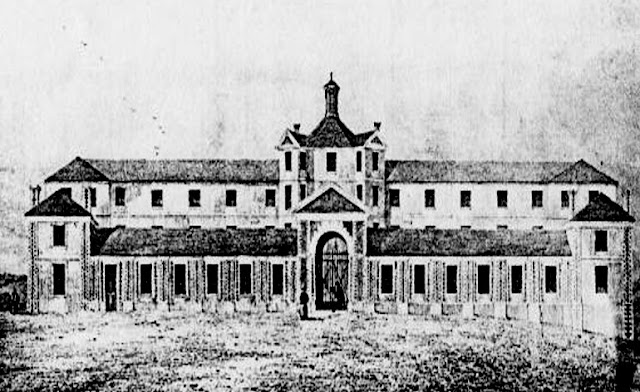 Inmates listed in Guildford Workhouse on the census of 1901

Once every 10 years, the census records give us a window into the ages and occupations of Workhouse residents.  In 1891 at Guildford Workhouse the Master, Duncan MacDonald, lead a team of 10 officers, including only two nurses.  On the night of April 5th 1891 there were 276 full time resident paupers and 10 casual poor sleeping at the Union Workhouse. 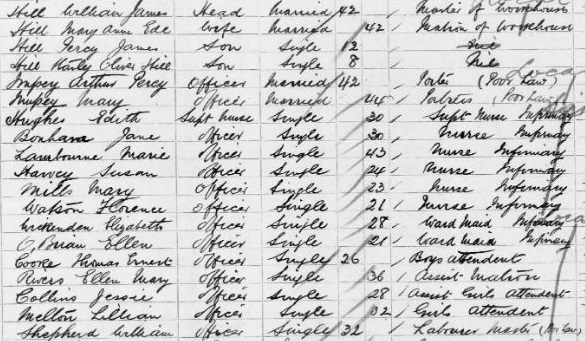 But I am going to concentrate on the 1901 census, which was recorded on March 31st. We find that the inmates range in age from newborn baby, Kate Hall, to 94 year old, Sarah Balchin, from Bramley.  There were 179 men sleeping in the Union Workhouse that night and 120 women.  107 children under 15 were resident, including 19 babies under 3.  Twelve of the inmates were described as imbeciles, one as an imbecile who was blind, one lunatic and one deaf and blind.  As 133 of the men and women were over the age of 68, the Workhouse was providing an old people’s home, as well as accommodation for the homeless and a children’s home.  Yet the one thing they all had in common was the definition, “pauper.” 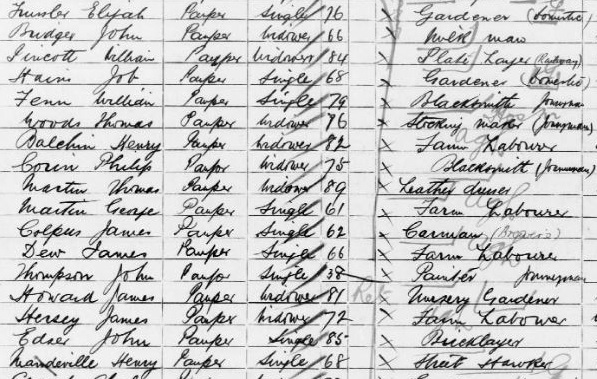 But we learn much more about these, “paupers,” by looking into their lives.  Many families are listed far apart on the census because they are male or female regardless of the fact that they were married couples.  In the case of the Standing family, Priscilla, aged 39 is separated from her 3 sons, Harry, aged 5, Thomas, aged 4 and Edwin, aged 2.  Although the 3 brothers had each other, they were taken from their mother at a very young age and she must have missed them terribly.

Another sad inmate of Guildford Union Workhouse in 1901 was Alice Clair.  Intriguingly, her birthplace in 1856 was listed as, “born at sea.”  Alice became a dressmaker but in December 1880 she gave birth to Julia Alice Clair at Marylebone Workhouse.  Tragically, little Julia died in 1882 and we presume that Alice returned to her work as a dressmaker until we discover her being admitted as a patient to St Peter’s Memorial Home in Woking on 11th November 1889.  This was a women’s’ care home for poor patients run by Anglican nuns.  Once again in 1901 Alice is in an institution, this time the Workhouse in Guildford, and eight years later, she died in Guildford.

It is probable that Alice was born, “at sea,” because her father was a soldier.  Another Guildford inmate, John Bridger, had an exotic birth in Demerara, Guyana, West Indies in 1835.  At that time the British army were active in the establishment of British Guyana and the abolition of slavery there so it is likely that John was also the son of a soldier.  We do not know when he arrived in England but in 1866 he married Mary Ann Wells in Guildford.  In 1871 he was living in Thursley with his wife and two sons and was working as a wheelwright.  By 1881 the Bridger family had moved to Godalming where John was a Cowman and Mary Ann had given birth to a third son.

Something catastrophic must have occurred during the next few years, as by 1891 John Bridger was resident in the Guildford Union Workhouse, listed as married, but his wife Mary Ann was living in Peperharrow with her youngest son and was working as a housekeeper.  Perhaps John had become incapacitated by accident or illness and Mary Ann was unable to look after him as well as supporting her family?  John Bridger was still at the Workhouse in 1901 but by then he is listed as a widower.  His son, Charles, age 29 was living in Godalming, working as a Leather Dresser and next door was younger brother, John A. Bridger, a railway porter.  Yet again John Bridger senior is listed as an inmate in the Workhouse in 1911 before dying in Guildford in 1914.

A frequently occurring surname amongst the inmates of Guildford Union Workhouse was Mayo.  This family can be found, in the census of 1871, living in Summers Lane, Godalming in a caravan.  William Mayo, his wife and two of his daughters give his occupation as pedlar.  Most of the family, including 5 year old Susan, were born on the south coast.  By 1881, Susan Mayo was living in the District Village Home for Orphan, Neglected and Destitute Girls in Barking, Essex near to the residence of her married sister, Mary.  In 1891 Susan had returned to Godalming where her daughter, Rose Mayo, was born. 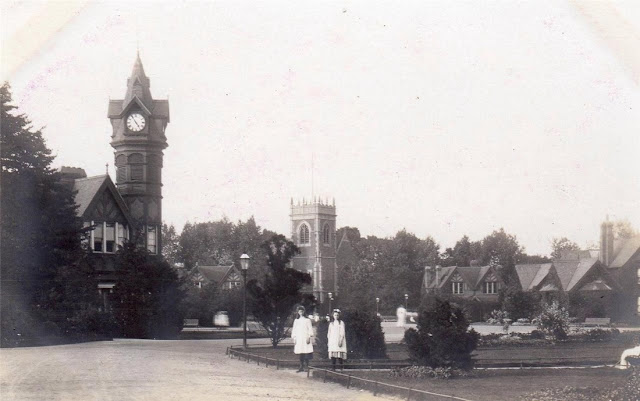 Susan had two more daughters, Ellen (Nellie) born in 1898 and Ivy in 1900.  She and her daughters were all residents of the Guildford Workhouse by 1901 and Susan remained there in 1911.  Rose was 20 by 1911 and had moved to Shepherds Bush to work as a housemaid.  Her sisters, Nellie and Ivy had been moved to Providence House Scattered Home in Artillery Terrace, Guildford under the care of a Foster Mother appointed by Guildford Union Board.  Susan Mayo died in Guildford in 1926. 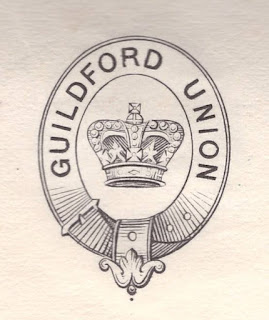 The Master of Guildford Union Workhouse in 1901 was William James Hill, aged 42.  His wife Mary Ann Hill was Matron and they had two sons, Percy and Stanley.  William Hill had been born in Polruan, Cornwall.  In 1878 he received his Mate’s Certificate in the merchant navy and this was followed by the Master’s certificate issued in Fowey in 1880.  However William later made a change to his career and by 1891 he was acting Master of the Union Workhouse at Liskeard in Cornwall.

Among the nurses in the infirmary were Hannah Howard, aged 36, Florence Watson, aged 21 and Marie Lambourne aged 43.  Hannah Howard had been born in Hertfordshire and as a child she lived with her father William, a greengrocer, and his family in East Barnet.  By 1881, Hannah’s mother, Mary Howard, had been widowed and the family had moved to Richmond in Surrey where Mary was a charwoman and Hannah a dressmaker.  In 1891 Hannah was working as a nurse in Sussex at the County Lunatic Asylum in Wivelsfield, before moving to Guildford.  As she grew older she gave up nursing and became the cook for a family in Hornsey, Middlesex.

Florence Watson was born in 1880 in Boroughbridge, Yorkshire, the daughter of Alfred Watson, a saddler and harness maker.  After working in the Infirmary in Guildford she moved to Lancaster where she nursed an elderly retired engineer.  Marie Lambourne was born Maria Lamburn in Emsworth on Chichester harbour, daughter of Hezekiah Lamburn, a carter, and his wife Elizabeth Crees.  In 1881, Maria was working as a cook for a Canon of the Cathedral church in Chichester.  In 1891 she was a charge nurse at New Broyle Infirmary Isolation Ward, Chichester, before moving to Guildford Infirmary.

We often believe that our ancestors rarely moved from their home village but the life histories of inmates and staff of Guildford Union Workhouse clearly show how widely travelled many of them were.  We can also see how easily individuals rose and fell in status and poverty due to circumstances frequently beyond their control.

In the 1930s my father went to Caterham School in Surrey where he was very keen on playing Rugby. He kept many team photos, several signed on the back. I am putting these here in case any of these men or their descendants recognise them. Most of them would have fought during World War Two. 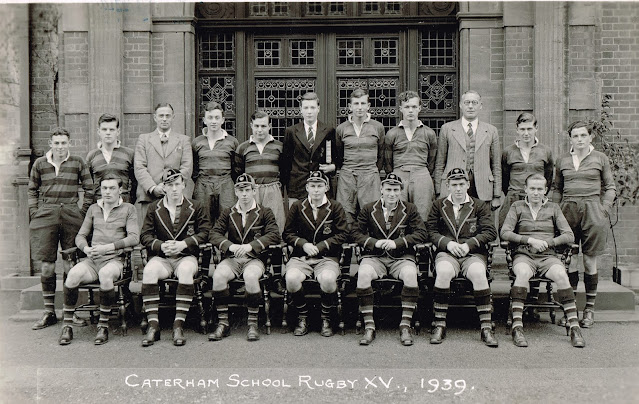 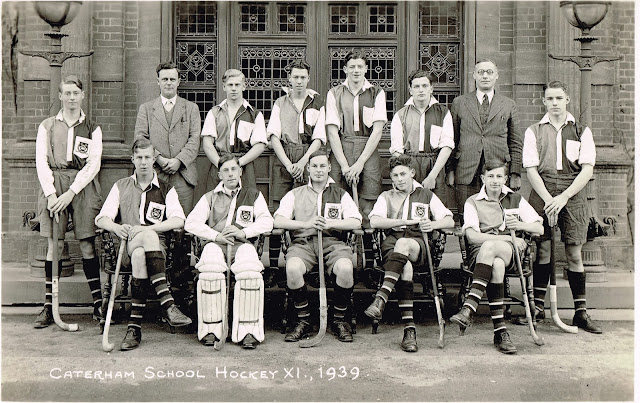 There are only 2 signatures on the 1939 hockey team:- Anthony G Hall and Denis G W Brind. 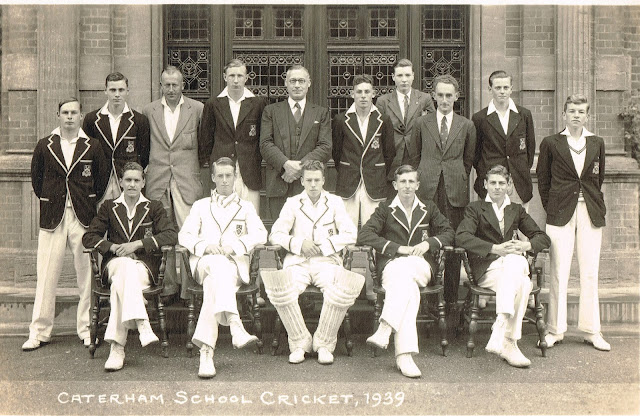 The 1939 cricket team bears no signatures. 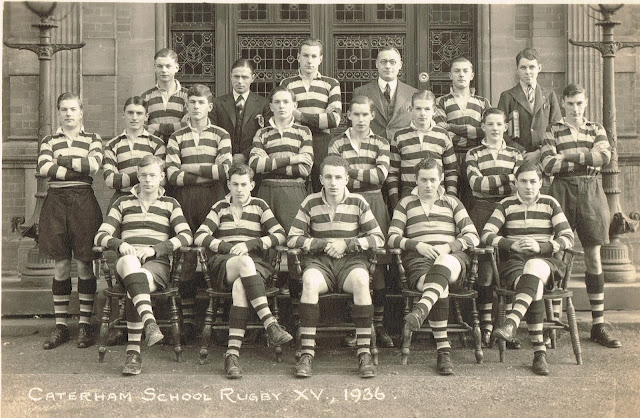 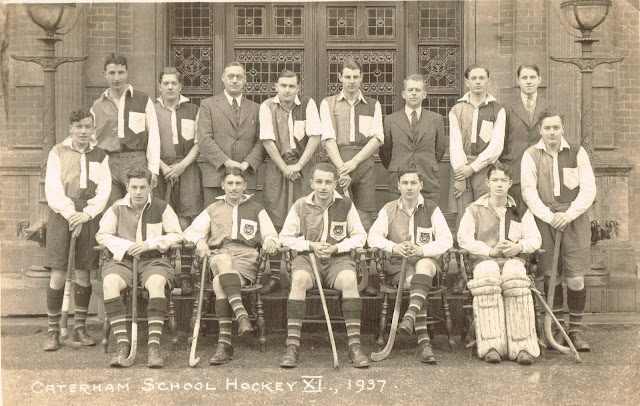 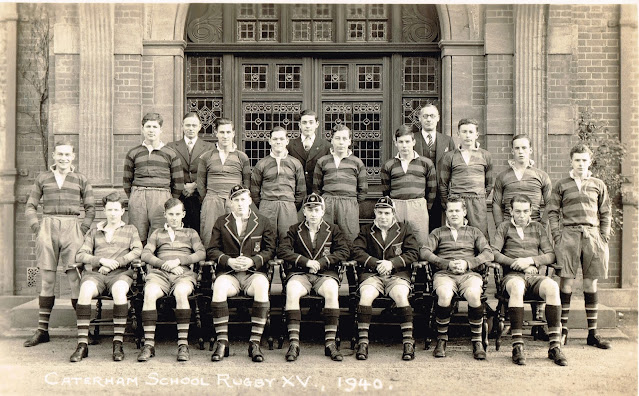 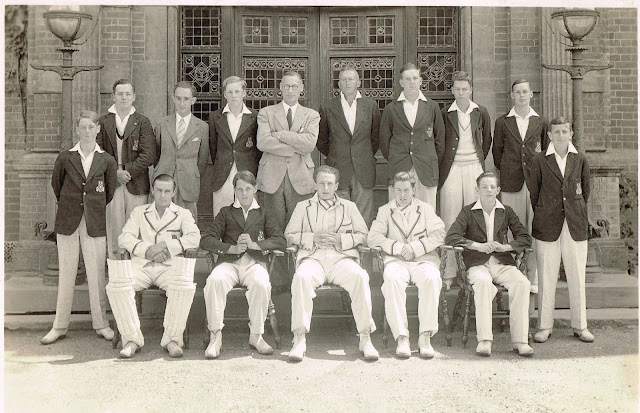 This unlabelled photo may be team Captains or Prefects. It includes Denis G W Brind from the 1939 hockey team plus Kenneth G Evans from the 1939 rugby and Denis K Britton from the 1936 rugby team. In addition David E Jenkins, John Webb,  R W McNeil and C Wells signed the back.
at May 24, 2021 No comments:
Email ThisBlogThis!Share to TwitterShare to FacebookShare to Pinterest
Labels: Caterham school, Pre-war, school photographs, sports teams, Surrey 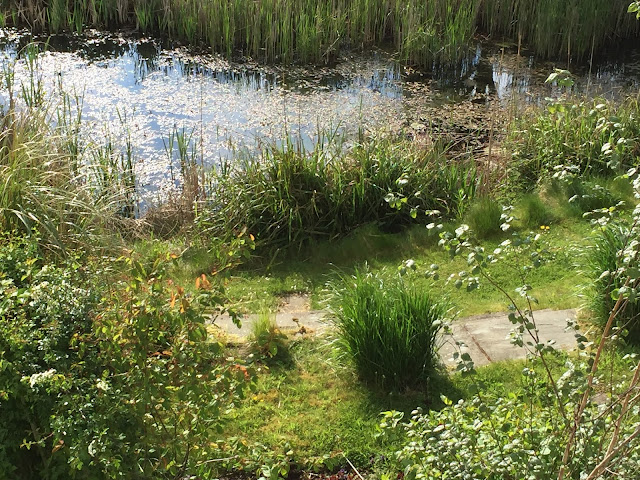 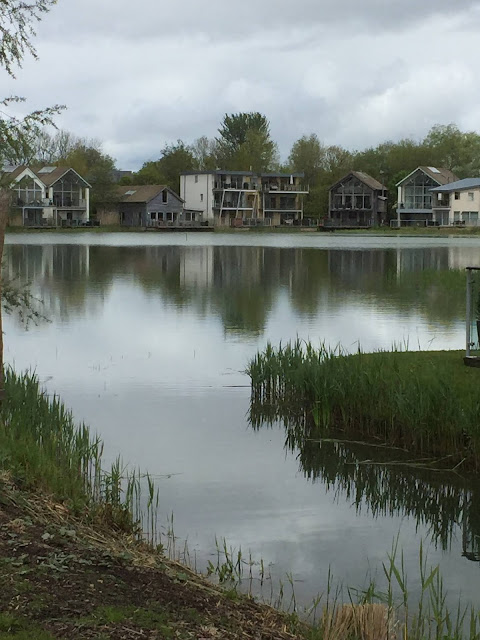 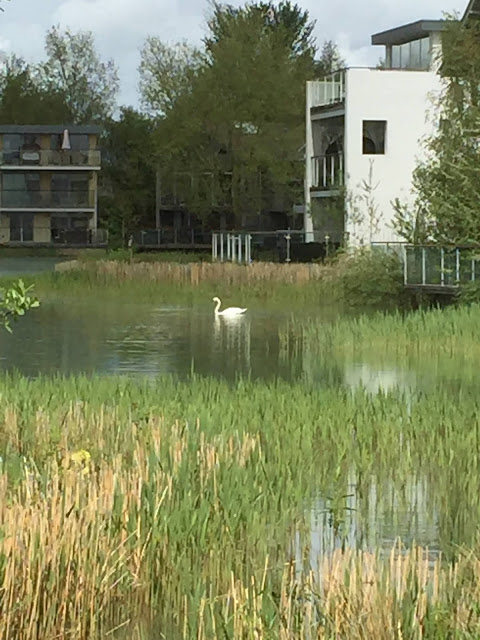 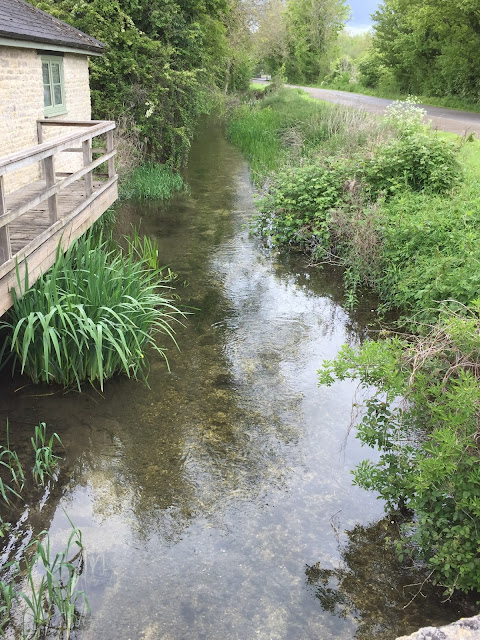 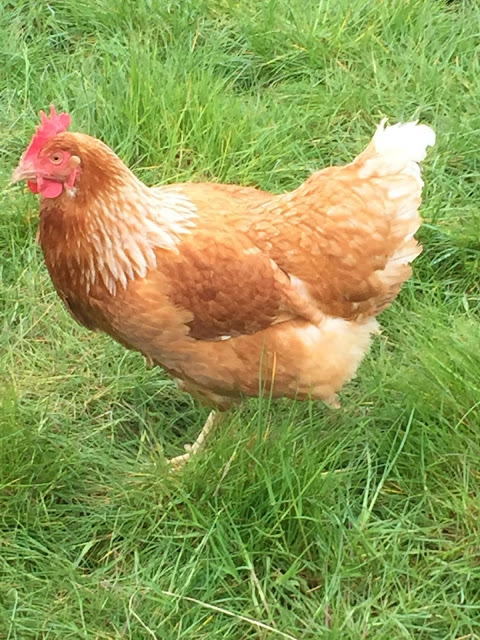 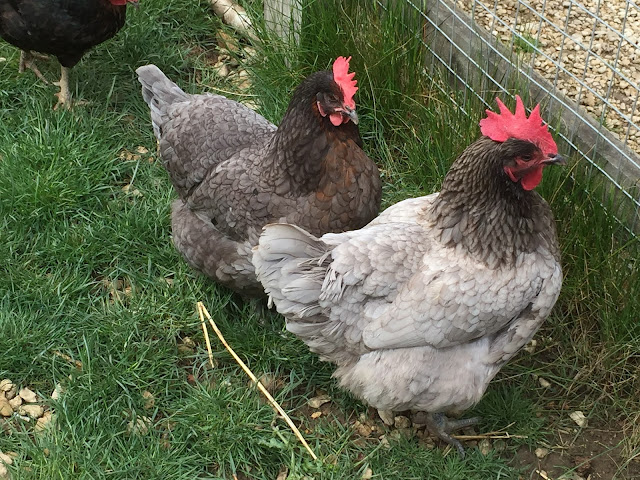 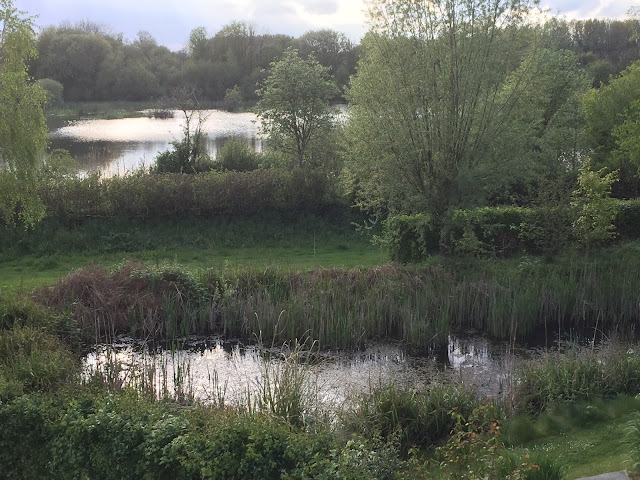 at May 19, 2021 No comments:
Email ThisBlogThis!Share to TwitterShare to FacebookShare to Pinterest
Labels: Gloucestershire, nature reserve, wet Spring 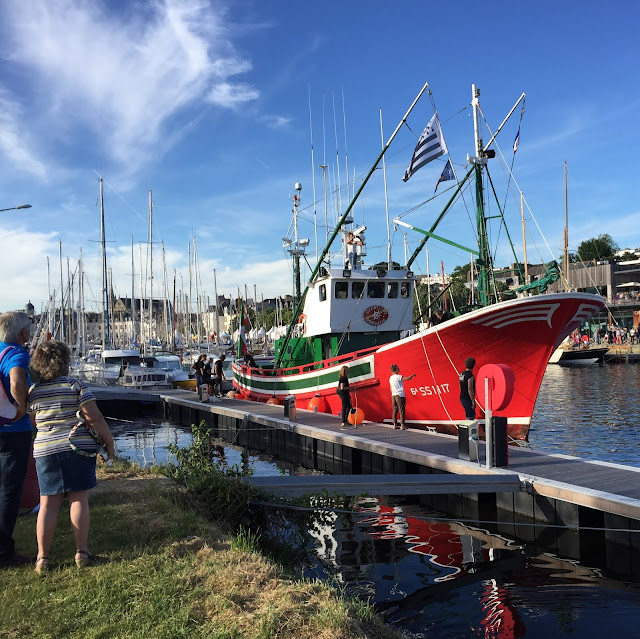 I am ending this challenge with a bright red boat in the canal in Vannes, Brittany during La semaine du Golfe in 2019. Looking forward to more travel in the future. 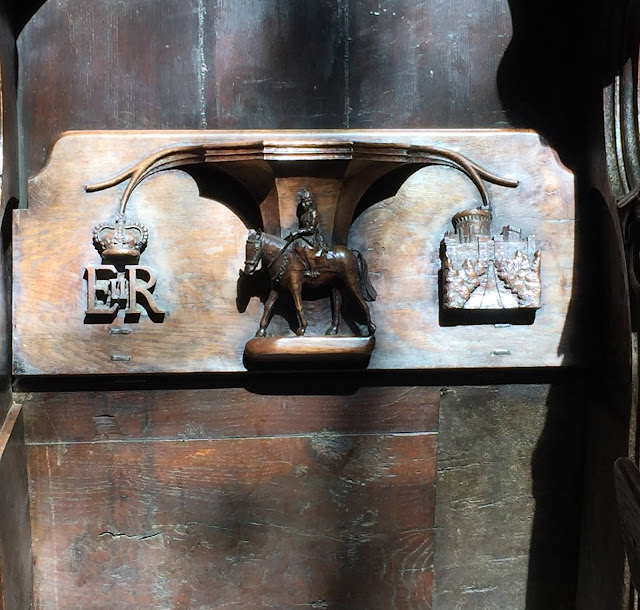 One of the 28 Misericords in St Laurence's Church, Ludlow which are shining brightly. 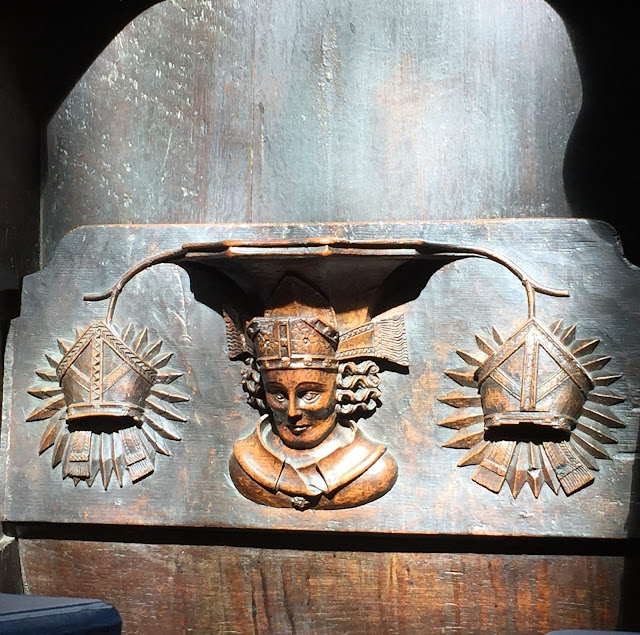 The Bishop, bathed in sunlight, represents the goodness of the church.
Becky is gazing at the moon for her Bright Square
https://beckybofwinchester.com/2021/04/29/brightly-shone-the-moon/
at April 29, 2021 2 comments:
Email ThisBlogThis!Share to TwitterShare to FacebookShare to Pinterest
Labels: #SquareChallenge, church, Ludlow, photographs 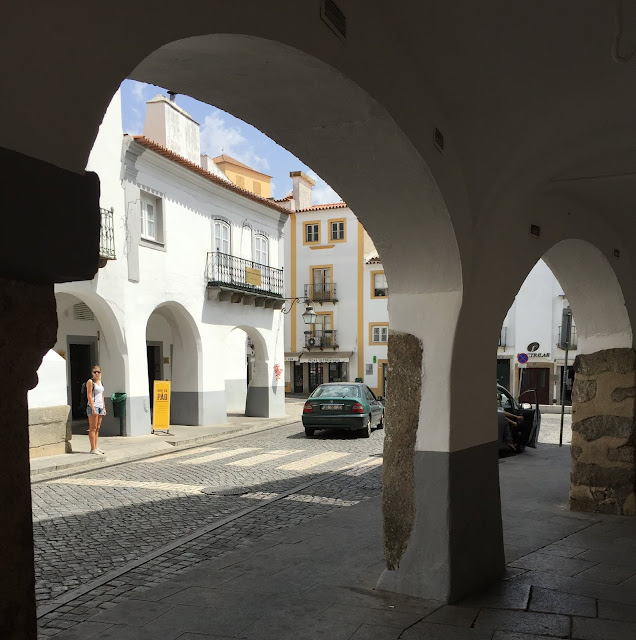 Underneath the arches - Looking out into the sunshine