Visiting Bodmin Jail
A fascinating building filled with sad stories which is well worth visiting. 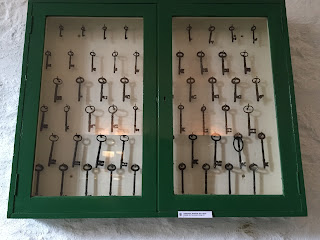 A Scottish Farm in the 1950s
Nostalgic photos of my grandparents’ farm. 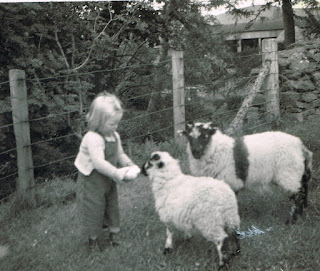 Dressing cardboarddolls
A children’s occupation from the 60s and 70s. 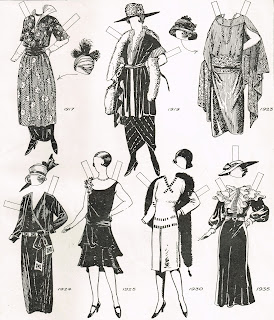 The Changing Face of Pedlar’s Acre
Looking at the south bank of the Thames. 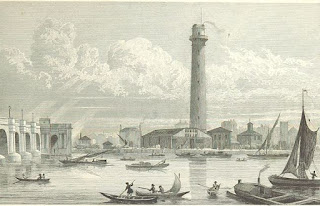 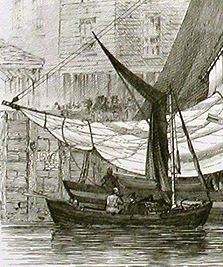 A Bundle of Old Letters
The discovery of some old letters which brought my ancestors to life. 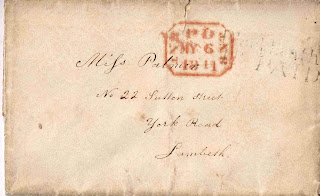 A Family Struggling to Survive
Living in the Workhouse and emigration to Canada was the fate of these children. 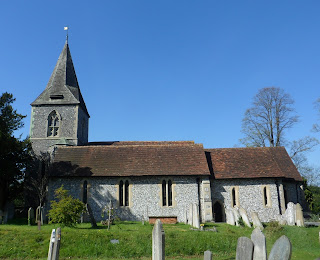 The Edwardian Seaside
The golden age of postcards show the popularity of the seaside in Edwardian seaside. 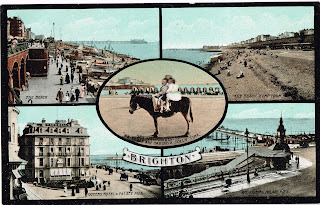 A 19th Century Romeo and Juliet
A tragic story of a soldier and his love. 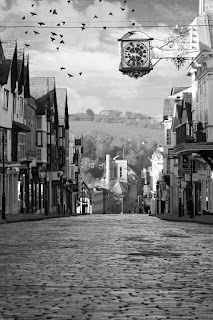 
An old soldier in the Workhouse

#Murder in the sand dunes

On Thursday February 20th 1908 a schoolmaster named Spurgeon was walking on the cliffs at Southbourne in Bournemouth when he noticed the clothing of a young lady between two sand hills.  On investigating he discovered that she was face down so he quickly rushed to tell the Coastguard half a mile away.  The body was that of Miss Emily Sherriff, a dressmaker, who had gone missing from her lodgings in Palmerston Road, Boscombe two days earlier.  She was found to have a muff over her face and had two handkerchiefs stuffed inside her mouth.
Police investigation quickly lead them to picture dealer and ex-guardsman, John Francis McGuire, who had been seeing Miss Sherriff regularly.  Like Emily, he was in his early twenties, but according to Miss Lily Hatch, her close friend of 12 years, the relationship the couple had, was like that of brother and sister.  Emily had last been seen alive by her landlady, Mary Lane, at 1 pm on Tuesday when she seemed very distressed by a note that had been left for her.  At 6.30 Emily went out but did not follow her usual habit of leaving her key under the door mat.  On Wednesday a telegram was delivered for Miss Sherriff but as there was no sign of her, Mrs Lane forwarded it to Mr McGuire’s mother.

By Wednesday afternoon, Mrs McGuire, Miss Hatch and John Francis McGuire were outside the door of Emily’s bedroom.  McGuire forced it open but they could find no clue as to the whereabouts of Miss Sherriff.  After her body was found on Thursday an examination revealed several serious injuries caused by blows made by foot, knee or a blunt instrument.  It was later reported that some of her jewellery had gone missing. 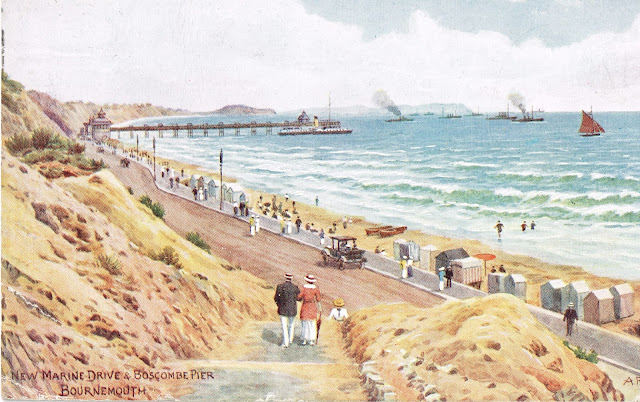 The trial of John Francis McGuire, which commenced in late March, was full of conflicting evidence.  McGuire said that he had last seen Emily on Monday 17th February and that he had returned to his home in London on Tuesday and yet a witness saw him catch a tramcar in Southbourne at 8.12 on Tuesday 18th February, quite close to where the body had been found.  He had in fact been seen in London on the Tuesday by a shoe black who knew him well.  The shoe black stated that McGuire gave him 2 letters earlier in the day asking him to post them after 8 pm. that evening.  There was evidence that McGuire did sleep in London that night but train timetables proved that he could have caught a train to London from Bournemouth at 8.45 pm. 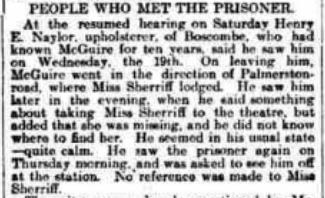 There was considerable disagreement amongst the jurors and so the prosecution was withdrawn on July 2nd and the magistrate released McGuire.  Within a few days McGuire was charged at Barnet of desertion from the British Army.  He had joined the Royal Horse Artillery in 1901 but later transferred to the Royal Horse guards.  In 1904, he was court martialed for stealing a pin from a corporal’s kit and was dismissed from the army.  One month later he joined the 2nd Life guards, but deserted in 1906.  Now that he had been discovered he was imprisoned for 84 days.

McGuire may not have been convicted of murder but his life lurched from one misdemeanour to another.  After his imprisonment had ended towards the latter part of 1908 he moved to Mundesley-on-sea, Norfolk where he and a young lady took a furnished cottage.  Calling themselves Captain and Mrs Francis, they paid no rent and were soon in debt with local tradesmen.  Finally, McGuire jumped on a train to London, with no ticket, leaving the young woman destitute.  We pick up his story again in February 1909 when he was taken into custody in Westminster with another man for fraudulent conspiracy to obtain goods from a firm of house furnishers, earning himself 12 months’ imprisonment.

But what of poor Emily?  She can be found in a list of 36 unsolved murders between 1890 and 1908.  There is no doubt that John Francis McGuire was a cad and a wastrel.  He said at his trial for conspiracy that he had had no home since he was 14 (when he joined the army) but his mother was a friend of Emily Sherriff so at that stage of his life he appeared to be cherished.  Many of the witnesses at the murder trial were unreliable so no clear verdict could be declared.

Probably the most popular type of postcards to be collected in the early 20th century, were those of Edwardian actors and actresses.  It was the golden age of British theatre and just like today, everyone wanted to know more gossip about their families. 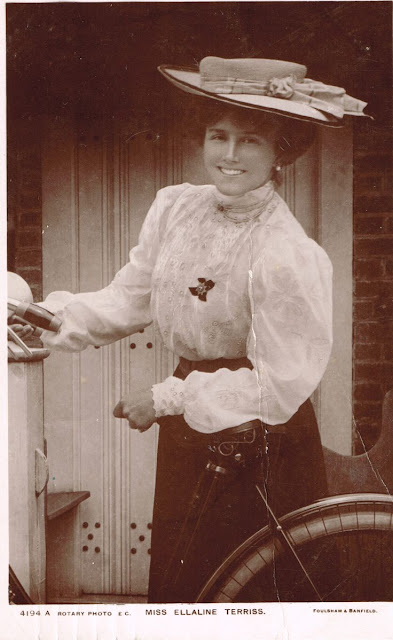 Ellaline Terriss made her London debut at the Haymarket in 1888, aged 16. She was a talented actress and singer who began her career in musical comedies.


She was the daughter of William Terriss, who after trying the merchant navy, tea planting in India and farming in the Falkland Islands, had become a member of Sir Henry Irving’s company at the Lyceum theatre.  Besides being a noted Shakespearian actor, he was also known for his swashbuckling roles such as Robin Hood.

A year earlier than Ellaline, Edward Seymour Hicks also began his career on the London stage at the age of 16.  As well as becoming a popular actor he soon became a prolific author of light comedies.  The public were thrilled in 1893 when he and Ellaline Terriss were married. 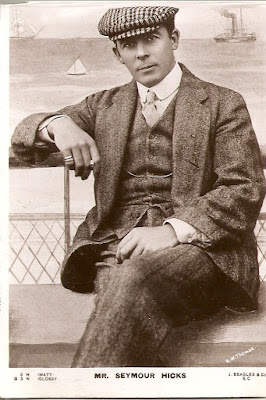 In December 1897 tragedy struck.  William Terriss, who was known for his kindness, had helped out a young actor, Richard Archer Prince.  He gave Prince work but the young man proved to be unstable and drank too much, so he was dismissed.  Terriss sent Prince money and the Actor’s Benevolent Society found him another part.  However, finding himself unemployed again, Prince blamed all his woes on William Terriss, so one evening he waited outside the stage door of the Royal Adelphi theatre, carrying a knife.  When Terriss arrived, Prince stabbed him and he sadly died.  The trial was read avidly by the general public and there was a great outpouring of sympathy for Ellaline and Seymour Hicks.

Their popularity was immense.  During the following year Seymour Hicks co-authored “A Runaway Girl” in which Ellaline starred at the Gaiety Theatre and the couple also adopted a four year old Irish girl, Mabel Magdalene.  In 1914 Seymour Hicks recalled, “My wife saw and fell in love with the sweetest of little Irish girls, and we adopted her, calling her Mabel. To-day she is a sweet and gentle girl of eighteen, and is dearly loved by us."

In 1902 Ellaline and Seymour Hicks appeared together in Quality Street by J M Barrie.  They had recently bought a new home called The Old Forge at Merstham in Surrey and their cul-de-sac was renamed Quality Street.  Two years later Ellaline gave birth to their baby, Betty.

Edward Seymour Hicks became so successful that in 1905 he built the Aldwych Theatre and in 1906 The Globe, although at that time it was called The Hicks.  After 1911 Ellaline appeared mainly in comedy and music hall.  During the First World War, the couple gave concerts to the troops at the Front in France and in 1940 they went to the Middle East with ENSA.  Having been the first British actor to perform in France during both World War I and World War II, Hicks was awarded the Croix de Guerre twice for his services and he was knighted in 1934. 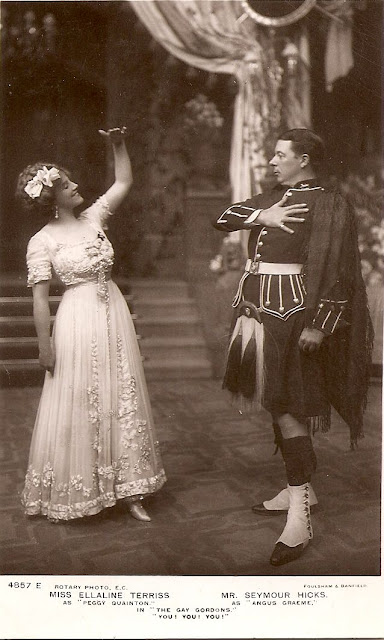 Following the Second World War, Ellaline and Edward moved to South Africa, but after the death of Seymour Hicks in 1949, Ellaline returned to England where she took up painting and had an exhibition in London.  She died in Hampstead in 1971, aged 100. 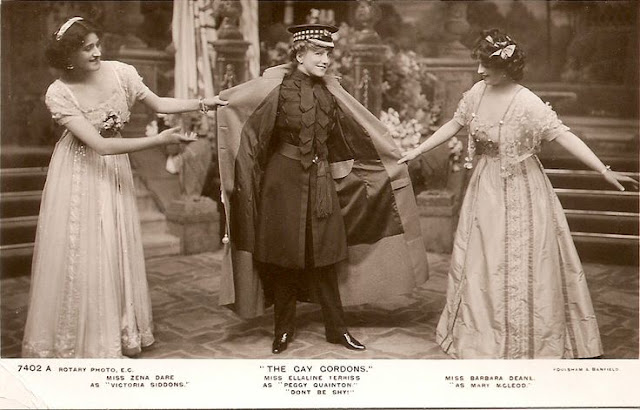