Another instalment  from my mother's Far East diary:-

In March 1969, after a week’s holiday with Thai friends in Bangkok, my parents set out for a few days’ visit to Cambodia.  They found Phnom Penh, the capital, a contrasting mixture of wide boulevards and narrow grubby roads.  After a hot stuffy night in Hotel Sukalay they set out for Siem Reap so that they could see the twelfth century temples in the ancient capital of Angkor. 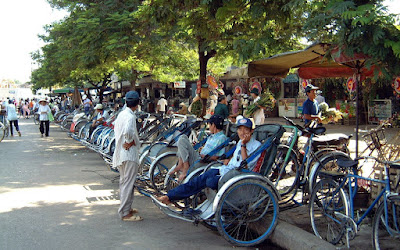 Tuesday March 11th 1969
We caught a cyclo-pousse to the centre of the city, where we were able to share a pick up taxi to take us to Siem Reap.  We were packed in tight with the locals in a Peugeot with 3 rows of seats.  Soon we were passing through flat, dry countryside sprinkled with wild lotus flowers.  The houses reminded us of those in Malaya as they are also on stilts, but they lack colour and have no plants in their yards.   We met strings of 4 to 6 bullock carts jammed full of clay pots and saw quite a few cows and water buffalos.  Occasionally there was a pony drawing a cart. 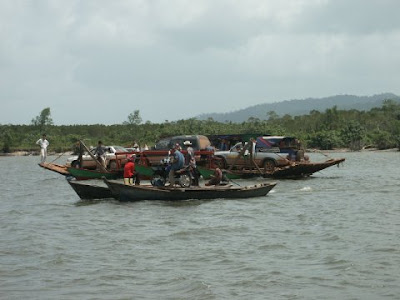 While we waited at Kampong Luong for a ferry across the river, we stopped at a food market where small children pestered us to buy drinks.   The long straight road continued with many dogs wandering in front of our taxi, so the driver constantly sounded his horn until we stopped at Kampong Thom for a cold drink.  We passed jeep style taxis, cyclo-pousses and buses.  As the rice had been harvested the fields were just dry stubble.  Reaching Siem Reap we changed into a motorcycle pousse for the last 7 km to the Auberge Royal des Temples.  The hotel is right opposite Angkor Wat, across the bridge over the “moat”.  There were a few buffalo in the water with ibises sitting on their backs.

Angkor Wat was dedicated to Vishnu when it was constructed in the 12th century.  Many of the carvings are of the beautiful “Apsaras” (Concubines who became goddesses) who hold you with their charm and serene smiles.  The carving on the stone walls is magnificent with so many details and a great many steps to climb!  The buddhas are in varying stages of decay, some having been broken while excavated.  Picture stories are told all along the cloisters.  Once each temple had a library, but all the books were left to rot.  We walked over to where a modern temple stood amongst many Stupas.  Here there was a procession of people under large round umbrellas.  Children were everywhere selling temple rubbings and ivory cow bells. 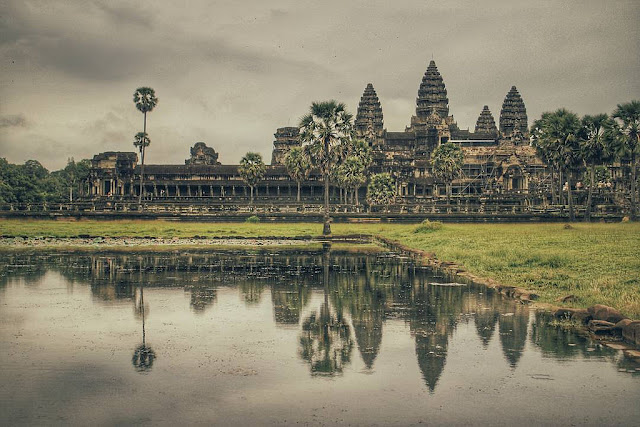 After dinner we returned to Angkor Wat which looked marvellous in floodlight.  Classical dancing was being performed on the esplanade, which was just the right setting, as the dancers emerged from the archway with the towering buildings outlined against the sky.  The dancers dress was similar to that of Thai dancers but the music completely different.  In their welcome dance they threw flowers at the audience.  Two young boys were dressed as monkey gods, one black and one white.  In their dance they fought in bare feet.  The farewell dance used fans which was a colourful finale.

We rose early to catch the coach to visit Angkor Thom (Great City), the last capital of the Khymer empire.  There we viewed Bayon temple, the best we’ve seen.  The bas relief friezes depict scenes from the past showing the Khymers with their elongated ears (a sign of long life).  Also shown are battle scenes where the soldiers rode elephants and the king rode a horse.  There are carvings of dancers and fishing boats surrounded by crocodiles.  Bullock carts are depicted laden with women and chickens and other food supplies.  The original grey stone had been painted red but as this wore off, lichen and moss have coloured it yellow.  The towers bore large faces on all 4 sides. 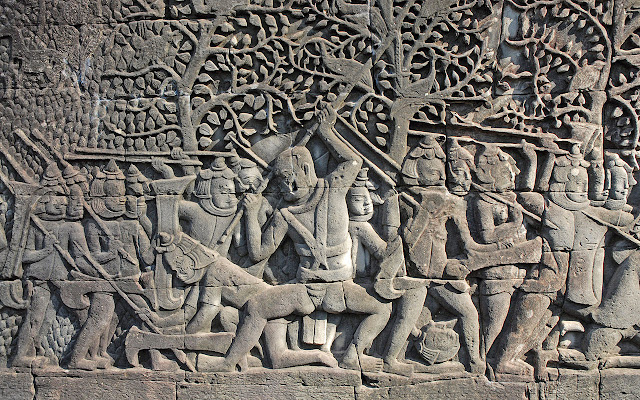 Angkor Thom is surrounded by a wall 16 kilometres long with Bayon at its centre.  A Buddhist sanctuary, people believed the temples to be the home of the gods.  On each side of the gate entrance are 7 headed Naga sculptures.  Resembling cobra heads they represent the seven races and have a symbolic association with the seven colours of the rainbow.  As we passed under the arch, we heard a scuffle, a squeak and then plonk on the ground behind me was a long thin green snake with a bat in its mouth.  I was just focusing my camera to take a photo when it suddenly started moving nearer to me so I sloped off mighty quick! 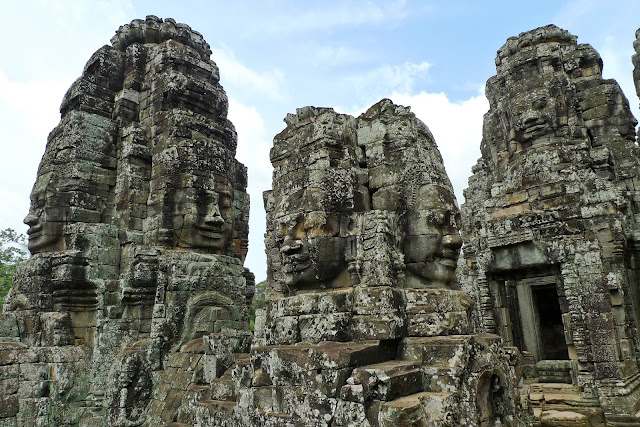 Later we walked along elephant terrace, a long wall with carved elephants all along it.  In the past kings sat above while the dancers emerged from the houses opposite to perform for them.  Sometimes the dancers performed on ropes stretched between the houses which were three storey towers.

We walked through the woods until we reached the King’s Temple.  Golden Buddhas were known to have been here but were stolen, in time of war.  Further on, is the King’s swimming pool with terraced steps like an amphitheatre.  There is an adjoining children’s pool.  They are still excavating the terrace of the Leper King.  A replica of his statue is there while the original is in the museum at Phnom Penh.  In the afternoon we went to the Petit Circuit which shows how they found the temples with vines growing out of the ruins.  Rainforest trees with wide fin-like bases were everywhere. 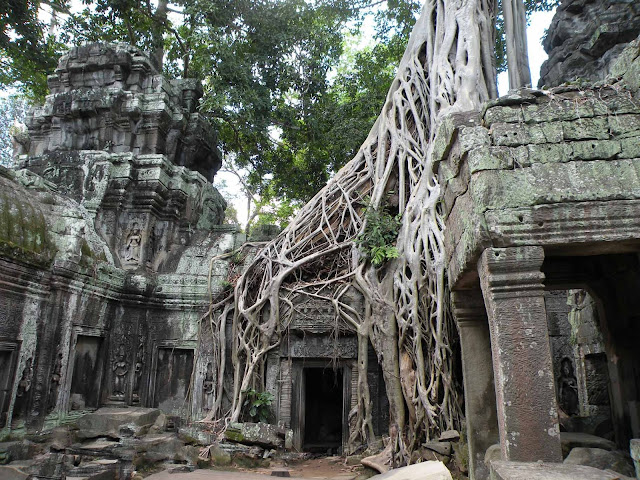 Thursday March 13th 1969
We left Siem Reap before 7 am sharing a taxi to Phnom Penh with a student called Sebastian Tombs.  It started to rain which is almost unheard of at this time of year.  A lorry splashed so much mud on the windscreen that the driver, who was the same one who had driven us to Siem Reap, had to find a puddle to clean it off.  We enjoyed seeing an elephant working in a field and also a large, reddish, weasel like animal on the road with a pointed face and thick tail. (It might have been the rare yellow-bellied weasel)

We saw many priests in their saffron robes standing at the roadside with their bowls, waiting to be given food.  Local women carried flat baskets on their heads containing dried fish and smoked ducks which they were selling by the ferry.

Friday March 14th 1969
This morning we saw more of Phnom Penh.  First port of call was the small fruit and flower market which seemed more expensive than Bangkok.  The railway station is clean and pleasant with a Stupa at the front containing the ashes of a Buddha.  Walking through the Chinese area we reached Wat Phnom at the top of a small hillock.  Next we saw Wat Botum Vaddei monastery with its many Stupas.  The museum was built of red sandstone and contained ancient jewellery as well as the original statue of the leper king.

The Royal Palace is similar in architecture to the King’s Palace in Bangkok.  The Coronation Hall contains two thrones for the king and Queen.  There are also gold coloured upholstered chairs in a circle for the Royal family to hold conferences.  The Sacred room contains the robes and head-dresses for ceremonies.  There are fabulous pieces of valuable jewellery which had belonged to Napoleon III including a huge diamond and many rubies and emeralds.

On a boulevard we saw the wreck of an American plane which had been shot down on the border of Vietnam.  We briefly saw the magnificent cathedral before heading for the airport.  We were home in Singapore by 11 pm where our dog, Sherry gave us a great welcome.

Four days later on March 18th 1969, US  B-52 bombers began attacking suspected camps in Cambodia for the first time.  Over the next few years the Khymer Rouge lead by Pol Pot fought a brutal civil war which he won in 1975.
at February 01, 2016
Email ThisBlogThis!Share to TwitterShare to FacebookShare to Pinterest
Labels: 1969, Cambodia, diary, East, journey, travel