The Thames embankment where the London Eye now stands has been the location of constantly changing landmarks.  Until the 16th Century, this area was foreshore to the Thames, overgrown with rushes and willows and subject to flooding at high tides. The road behind the Royal Festival Hall, Belvedere Road was the Narrow Wall, a road built on the embankment to the Thames.  By the end of the 18th century this area was packed with timber yards and wharfs.

The land running from Belvedere Road to the river between Waterloo and Westminster Bridges, once known as Pedlar’s Acre was originally a small strip of one acre and nine poles, located alongside the Narrow Wall and belonged to the parish of Lambeth for over 400 years. 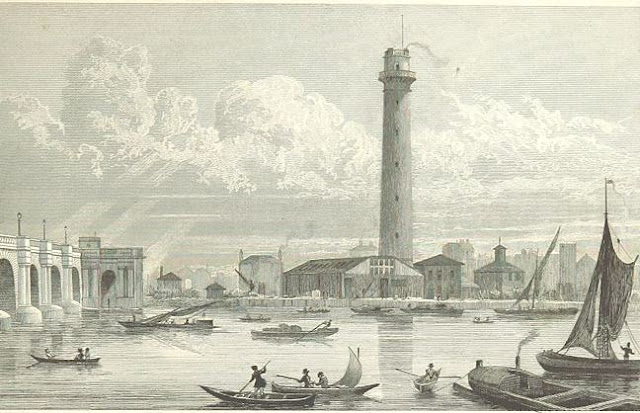 One landmark you can always spot in pictures, after its construction in 1826, is the Shot Tower which was built as part of the lead works for the production of lead shot.  From the gallery, molten lead was dropped to form large shot.  Half way down the tower was a floor where molten lead could be dropped to make smaller shot.  The Shot Tower was demolished shortly after the Festival of Britain in 1951. 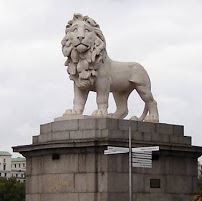 In 1837 the Lion Brewery, built on the site of a former Water Works, commissioned a locally made Coade stone lion which was mounted so as to be clearly visible from the river. The building was damaged by fire in 1931 and after being used for a short time for storage, it remained derelict until it was demolished in 1949 to make way for the construction of the Royal Festival Hall. The redundant lion was painted red and put on a plinth at the Waterloo Station entrance to The Festival of Britain.  The lion was subsequently relocated to the end of Westminster Bridge and stripped back to its original colour.

Pedlar’s Acre is said to have been given by a grateful pedlar, on condition that his portrait and that of his dog should be preserved for ever, in painted glass, in one of the windows of Lambeth parish church.  By 1504 Pedlar’s Acre already belonged to St Mary’s at Lambeth as rent of £250 a year for the land is listed in the Parish records.  The story of the Lambeth Pedlar is connected with the tale of the Pedlar of Swaffham.  The Pedlar of Swaffham in Suffolk dreamt that if he travelled to London Bridge he would find a huge fortune, but in London his only luck was the advice given him there to return and dig for treasure at home.  He followed this advice, digging up a pot of money in Swaffham and then digging further down to find a bigger pot with even more money!  The story in Lambeth is that he rewarded the kindness he received when a penniless pedlar by returning with a fortune and donating land and money to the parish in return for the immortality of his portrait in glass.  In 1884 a cynical vicar removed the glass portrait but it was later replaced. 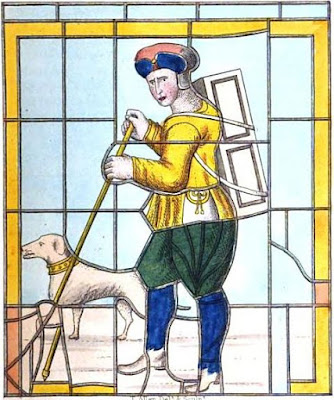 In 1908 Pedlar’s Acre was sold for the construction of County Hall.  Objections were raised that the land belonged to St Mary’s Lambeth but no documentation before 1826 was considered relevant.  When the land was excavated for the foundations a boundary stone was discovered on which was written, Lambeth Boundary of Pedlar’s Acre 1777.
at July 10, 2015
Email ThisBlogThis!Share to TwitterShare to FacebookShare to Pinterest
Labels: history, Lambeth, London, St Mary Lambeth, Thames, Waterloo