In a recent auction, a collection of paintings by Napoleonic prisoner of War, Ambroise Louis Garneray (1783-1857), were sold.  They included a picture he had painted, while held by Britain for eight years, of a line of prison hulks and warships anchored in Portsmouth harbour, which sold for over £11000.

Garneray was born in Paris where his father was court painter to Louis XVI.  At the age of 13 he ran away to join the navy and sailed to the Indian Ocean.  In 1799, his ship was captured by the British off Mauritius but he swam ashore and made his escape.  There being no other naval ship present, he joined the corsair Confiance where he was a crew-member when it captured the Kent in 1800.  Using his share of the prize he became vice-captain of a slaver and then served on merchant ships until the renewal of war with the British gave him the opportunity to re-join the French
navy in 1803.

Unfortunately, three years later the Belle Poule, on which he was serving, was captured by the British and this time he was imprisoned on a hulk in Portsmouth harbour from 1806 until 1812.  His good behaviour and artistic talent meant that he was allowed ashore for the last two years of his confinement where he painted a series of views commissioned by an English picture merchant.

On his release in 1815, Garneray returned to Paris and there he was commissioned by Napoleon to paint two paintings of returning ships, but these were unfinished for many years, due to the regime change.  He became the painter of the French navy in 1817 and went on to become director of the museum of Rouen.  As his career declined, he was awarded the Légion d'Honneur by Emperor Napoleon III. 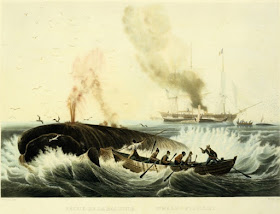 Garneray was an imaginative man who wrote his own biography including many exciting, impossible achievements.  Some people consider it to be the first maritime adventure novel.  Indeed, he has been cited as an inspiration for the events of “Moby Dick.”